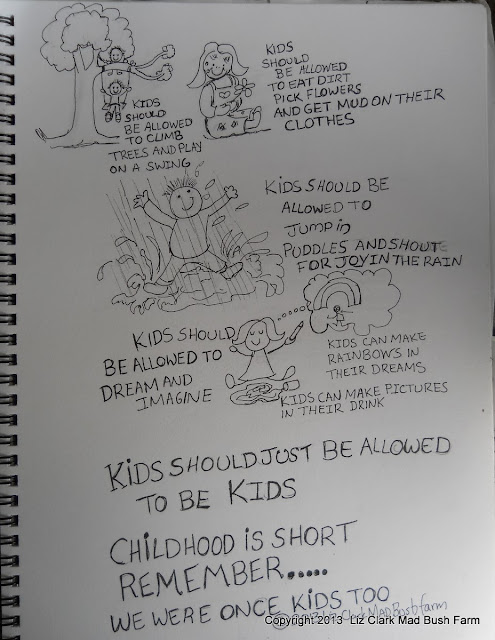 I'm tired of seeing more and more of these politically correct jerks in power telling us what to do with our kids. More so when it's getting to the point where kids can't even play in a tree without a stack of regulations being drafted to keep kids safe. How safe is too safe. When our kids can no longer explore a tree, play on a field, or sit in the mud and make mud pies just in case they get germs. When my girls were little, they ate dirt and sand, tried worms and slugs and the cat food. Why? Because they were being kids! What's really crazy is the latest piece of stupidity and that is to introduce A Sexuality/Health Curriculum for children of the tender age of just five years old. State schools have to implement the new curriculum which is as follows:

What Year 1 students will learn

• Working together as a class to create a safe classroom environment

• Discussing the meaning of respect and showing respect for others

• Describing themselves and their relationships with others, including similarities and differences

• Describing themselves in relation to their gender

• Exploring and sharing ideas about friends and classmates

• Using 'I' statements to express ideas and feelings

I;m not old fashioned and there are certain things children should know, however five year olds would have no comprehension of the politically correct terminology that is peppered through out the above. They are little kids! And little kids should be allowed to play, not end up being made to somehow fit in with some pc nutter's idea of how a young child should be educated. Parents should have the right to object and withdraw their child from such a curriculum. In short it's stupid, short sighted and an invasion of a parent's right to educate their child about the birds and the bees at the appropriate age. 5 years old is not in my honest opinion that appropriate age. All of this stuff is a hangover from the "I" stuff from the early 1980s. Self awareness courses, woman's rights movement (which I am not against) and other ideaologies. I thumb my nose at the policy makers who came up with that PC crap for little ones. LET KIDS BE KIDS!
Email Post
Labels: education parenting political correctness sex education for 5 year olds stupidity