An HK Holden, A Sledgehammer and a determined Dad 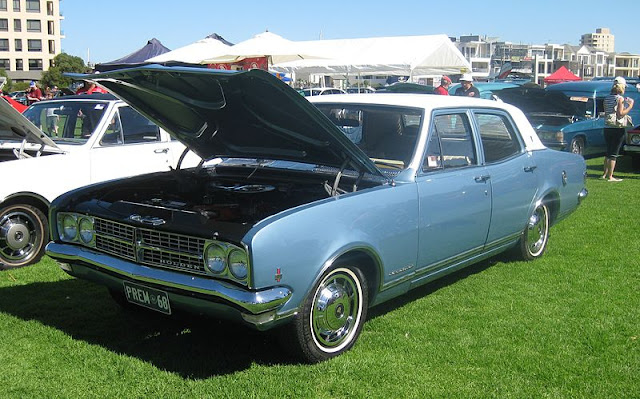 For those born sometime in the 1960's in Australia or New Zealand, the old Holden station wagon was always part of the scenery. There would always be a Holden parked on the side of the road or in someone's driveway with the kids playing around it on a Sunday afternoon.

When I was growing up in a very large family, consisting of a total of six kids, my Mum and Dad were in business and my father bough two holden station wagons. He had to, with a family of the size we all were. My elder sisters got their licenses at 15 years old or so and were used to driving around in the station wagons.

Each Christmas with two holden wagons loaded to the gunnels with pets, kids and teenage driver in one and Dad in the other, off we would head up north to the beach house for 6 weeks or so. Dad would head back to work at his panel shop back in Avondale in Auckland, after a three week break leaving Mum with the yellow holden wagon while he would take the green HK Holden station wagon which was used as the panel shop workhorse.

We had lots of fun in that old station wagon. Heading off sitting in the back tray watching the cars behind and counting how many red cars we could see. Dad was a real worker. He was always doing something up at the beach house property which had a steep drive way leading up to a hill over looking the Whangateau Harbour. It was a magical place where we had fishing and swimming right at the bottom of a clay track. The old place consisted of a patched together batch like construction with an aluminium caravan attached serving as Mum and dad's bedroom. It was a fun place rough and ready and we didn't mind one bit.

The driveway though was a gravelled nightmare, and it took sometimes a couple of goes to get the cars up to the top. There was perhaps a bit of a strange ritual to getting up that goat track of a driveway. It used to be turn in off the road. Back the car down a bit, then boot it on the accelerator and keep it down until you got the car to the top. The holdens were good for that.

Down the side of the drive Dad had planted heaps of trees which over time, had grown strong and .Their roots, had helped to stabilise things on the cliff side of the drive. But, there was still that gravel problem. In his wisdom, my Dad began to slowly, but surely put in concrete strips near the top. Near the base though, the gravel remained, and it was pot luck to still take that ritual rev up at full bore up the slope with tyres skidding and prayers going up the car wouldn't go sliding over the side.

One afternoon during the Christmas break, Dad decided to take me and my younger sister out for a drive to Warkworth, and pick up some badly needed supplies for our next fishing trip out in the 14 foot speedboat our family had. So off we went into town got the bait and some extra food for dinner that night before heading back to Whangateau and that darned gravel nightmare that would be awaiting our return.

At the bottom Dad lined up the old HK green holden planted his foot on the accelerator and off we roared. Never mind that there just happened to be a bit of loose gravel in the wrong place....

The tyres lost traction and off the side of the drive we went with the old holden slamming sideways into the trees. Back then cars were made to handle the hard knocks. Both doors on the passenger side had been stoved in. There we were sitting in the car still wide eyed and blinking looking like possums caught up in the headlights.

"Bugger" Dad said before shaking his head and muttering other things about that darned driveway. He slammed the old holden into reverse and somehow we ended up back on the drive and eventually back up at the top.

For a few days the doors of the holden remained completely stoved in. The huge dents in the panels told the story of HK Holden versus rock solid gum trees. Holden 0 Gumtrees 100. Dad though fixed dented up cars for a living. He soon had the doors opening again and then decided to get those panels straightened out until he could fix them up properly at the workshop.

Off came the upholstery panels, then the innards of the window mechanism all watched by a couple of young kids who liked seeing their dad doing his trade. Panel hammer wasn't handy so off dad went and got the one thing he knew would soon sort out the big dents in the door panels.

Yep you guessed it one heck of a big sledgehammer that went from its role of breaking up concrete and other things it was used to demolish to panel tool. The bangs were ringing out loud across the bay. Dad in full swing with that sledge hammer bashing out the doors of that tough old Aussie made HK Holden wagon and its dented doors. Bash, crash, smash...clang. Okay so it bend the hinges a little...but soon those tough old panels made of heavy gauged steel were soon looking a lot straighter.

They say kiwi ingenuity comes down to a piece of number 8 wire..in this case it was a dirty great sledge hammer and one determined dad.
Email Post