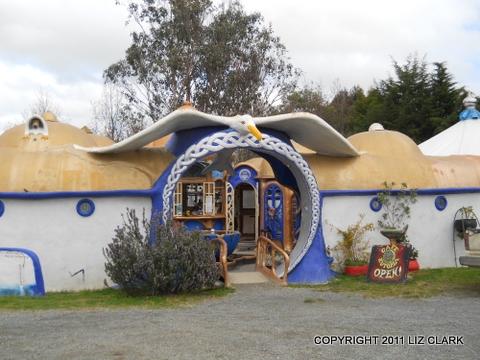 "So far, over three years off and on, we have built five ferrocement domes joined with arches around a courtyard with a ferrocement fountain carved as a blue lotus, a part of the cloister wall, with pillars carved with two fairy-gnomes, and a moongate with a 6-metre guardian gull over it. And two ferrocement tables, one with a spiral support, the other carved with a picture of a man and woman, and the caption ‘Live hand in hand, and together we’ll stand, on the threshold of a dream.’ (from the Moody Blues song)."

Driving back home yesterday from Warkworth with my Mum, we decided it was high time we had a stop at Kaiwaka, and checked out the cheese shop that we keep meaning to visit every time we go through. Like everything, it just seemed to be left. While I had the brief chance, I managed to get a few shots of the amazing Eutopia Cafe. It's a walk in work of art that resembles a cross between Noah's Ark and something out of the Realms of Fantasy. 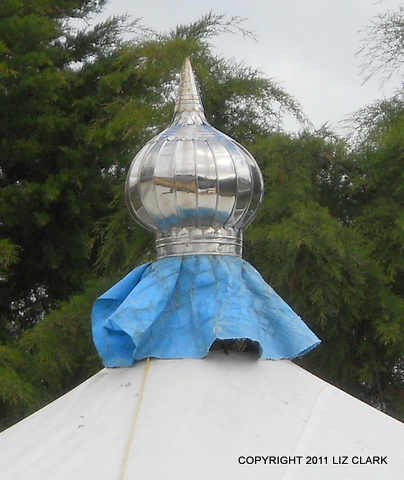 The roof tops inspire imaginings from the tales of the Arabian Nights. We'd be forgiven for thinking it was a step from reality into a literal dream time of the creator's imagination. All we would need is for the characters of fantasy to step out of the books and become three dimensional people. 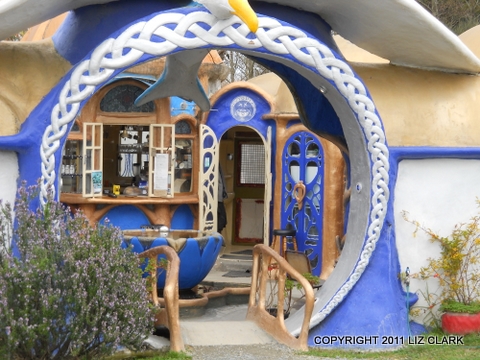 It's the entrance that really impresses. Themes of the ocean intermingled with something from out of Lord of the Rings. Celtic type knotwork design adds to the illusion that at any moment Gandalf the Grey might just step out and greet his visitors. The owners have a website that you can check out here. It's worth a read 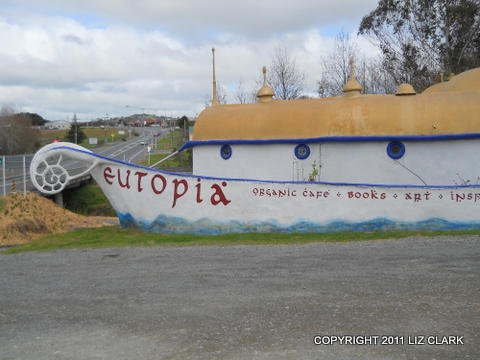 Next time I'm in Kaiwaka I'm going to make sure I stop there and have a really good look and also enjoy their legendary organic food they have there.
Email Post
Labels: Eutopia Cafe