Talk about One eyed! 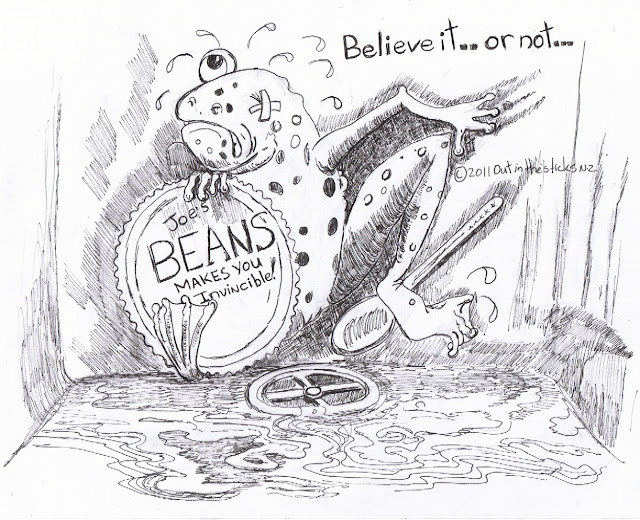 Sinks are meant to be used for washing dishes right? Well yes, they are supposed to used for the dishes, even though I hate doing the damned things but sometimes there other uses for sinks. There I am, gasbagging on the phone to a good friend and....kids show up they were conspiring against me.  Usual racket and of course I'm half deaf, so that doesn't help much when one is trying to have a polite conversation on said communications device. Whoever invented kids should have supplied a mute button with remote.  Ah-hem! So where were we again? Oh yes that's right the conversation. There we are talking then Inaya in her wisdom frantically waves he hands like one of those windmills and says.."Mum...there's a frog in our sink". She gets waved away the conversation is way too important right then to take in what she had actually said. Says it again more insistent this time. So I tell her to go and sort the thing out. Crash rattle bash.....muttering noises...more crashing and a croaking sound. Yes that's what I said a croaking sound. And no the frog had not croaked it. Somehow, a frog had indeed decided to make our sink its home. Not just any frog at that this was a one-eyed frog. I was starting to think that I was staring at a Gary Larsen Farside cartoon. The one where it has all those three eyed gophers sticking out of the holes with noses, where their eyes should be and eyes where their noses should be...and in the distance is the sign that's scrawled on it "Nuclear Waste Dump"? Yes that cartoon. Said one-eyed frog was carefully removed from the sink in question and sent back to the pond where it came from. I should have got the amphibian to do the dishes before it left the premises. Darn!
Email Post
Labels: croaking it mutant frog OMG sink
Location: Northland, New Zealand