Years ago, while riding my horse along the long stretch at Muriwai Beach just north of Auckland City, I came across the washed up remains of a strange looking dolphin. It wasn't very large being no more than a metre long. It left a long lasting impression in my mind. Around the midsection was the remains of a nylon fishing net, so entangled, it was hard to tell the marine mammal's remains from the man made death trap, that had caused it to drown somewhere off the west coast, before eventually it, and the net, ended being washed up on the black sands of Muriwai. A few years later, I realised I had seen what remained of the very rare Maui's Dolphin.

This year in 2012 the Department of Conservation conducted a population census on the Maui's Dolphin. Their count revealed a mere 55 adult individuals, compared to the previous 2004 statistics of 111 adult individuals.

The discovery of this small cetacean was only relatively recent (2002) after Dr Alan Baker found distinct differences in the skeletal, and colouration differences. This mammal is now recognised as being a subspecies of the Hector's Dolphin. 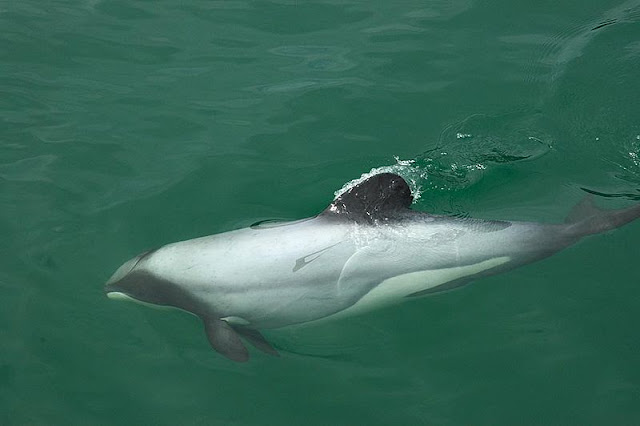 This year, the Department of Conservation have called for submissions on the Maui's Dolphin under the Threat Management Plan Review for Maui's dolphin. The public have until 5 p.m. November 12, to make a submission on the protection of this critically endangered species of marine mammal.

During September news broke that the New Zealand Government voted against further measures by the IUCN to mitigate the effects of fishing industry impacts on the Maui population. It resulted in international outrage.

"AWARE that the IUCN Red List has classified the Maui's Dolphin subspecies which is primarily resident along the West Coast of  the North Island, New Zealand as critically endangered."

New Zealand with two votes used that to vote against the motion put forward in the IUCN proposal:


A motion, aimed at stopping the extinction of the world's rarest dolphins and porpoises, including New Zealand's Hector's and Maui's dolphins, was put forward at the IUCN's World Conservation Congress in Korea last week.

Some 576 members, including governments and NGOs, voted for the motion. New Zealand is the only country to vote against.

It was initially believed two countries opposed to the motion, but it has since been revealed that New Zealand had two votes.

The move was labelled as "shameful" and a "disgrace"  by conservation groups and critics.

"The New Zealand government has acted shamefully and can no longer claim to be leaders in conservation," WWF's marine programme manager Rebecca Bird said.

The New Zealand Government's position was to oppose the IUCN motion to ban gill and trawl nets out to the 100 metre contour.

Following the vote against the motion an explanation of vote was provided to congress by the Head of Delegation. That explanation was;

In an article recently World Wildlife Fund (10 October 2012) claimed the NZ Government had ignored a 30,000 signature e-petition to reconsider its stance taken at the IUCN congress and support the proposals put forward

“If we fail - and become the first country in modern times to let a marine dolphin go extinct on our watch - New Zealand's international reputation as clean and green could be in tatters . . . The world is watching."


NABU International, a Germany based conservation group have launched a petition to convince the New Zealand Government to reconsider their stance on the refusal to mitigate the impact of fishing on the Maui Dolphin population. They are seeking 10,000 signatures you can sign it here

" The situation for Maui’s dolphins, a subspecies of Hector’s dolphins, is even worse. More than 94% are already lost and Maui’s dolphins are now confined to very small remnant population on the west coast of New Zealand’s North Island. With just 55 survivors older than one year, less than 20 breeding females, and an annual decline of around three percent, Maui's dolphins are facing imminent extinction."

"Now numbering barely 100 individuals, Maui’s dolphin is classified as critically endangered, and almost all are found on a stretch of coastline a mere 40 km long. Near obliterated by nylon nets, this pint-sized dolphin might seem to need a miracle to recover, but science suggests that it may have avoided the spectre of catastrophic genetic decline, and paints a single, clear route to salvation."

EXTINCTION -  The state or process of ceasing or causing something to cease to exist.

In 2004 the population estimate was 111 adult individuals. In 2012 the population of adult individuals stands at 55.  That is a 50% decrease in under a decade. The loss rate per year stands at 5.3 individuals (Department of Conservation figures) despite measures taken to mitigate impacts by the fishing industry. Within another decade, this cetacean will become another added onto the extinction list. Our government needs to stop burying its head in the sand and take further measures to protect our rarest dolphin. Simply put - this isn't good enough. 100% Pure Zealand? Yeah right!
Email Post
Labels: extinction fishing industry IUCN Mauis Dolphin NABU International New Zealand nz government vote