Cuddle Cub and Carnival Man - A Short Story to think about 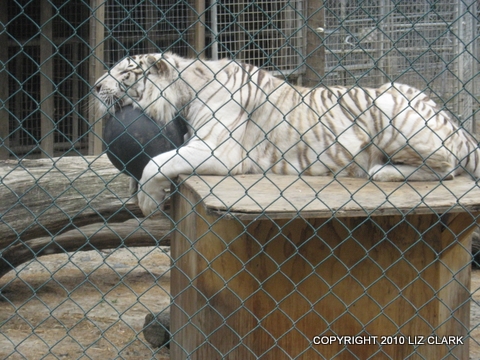 There was once a man everyone called

He liked to dress up in very bright colours and big hats and pretend to a Lion Tamer.

He wasn’t nice to anyone, and was never kind to the animals he kept in tiny cages behind his run down old house out in the country.

If he had lots of money, then he could throw away all of his animals that he didn’t feed properly and get very fat and rich.

He made his animals do silly tricks so people would pay him money to see them perform.

He made them ride bicycles, stand on their heads and if they weren’t fast enough to do as their told - he hit them with a big whip.

The big whip hurt very much, and sometimes the animals he hit with it cried.

But, Carnival Man wasn’t making any money out of his performing animals. They were far too tired and sick from not having enough food to eat.

He needed to find a new animal to make him the money he wanted to get fat and rich.

One day, as Carnival Man visited a zoo he saw a little tiger cub sleeping with his mother.

The little cub was just a few weeks old and looked very contented as he slept in the sun.

Carnival Man wanted the little tiger, he went to the Zoo Man and said

“Zoo Man I want to buy your tiger cub, so I can put him in my Carnival Show.”

Zoo Man though, was not very happy.

He knew Carnival Man was a very, very bad man who was cruel to animals.

“Carnival Man we don’t sell tiger cubs. The little tiger cub you want to buy is very important. He is a Sumatran Tiger, and his kind, are almost extinct. When he is grown up, he is going to be sent to a special place where he can meet a lady Sumatran tigress, and they can have a family of their own.”

Carnival Man was very, very angry. His face went all black and blue, then he shook his fist at

“I will have that tiger cub!” he shouted, shaking his big fist as he stomped out of the zoo.

“Just you wait and see! He will be mine, and I don’t care what you say!”

That night when Zoo Man had gone home, Carnival Man sneaked over the gates, and then stole the little tiger cub away as his mother slept.

“Your name is now Cuddle Cub, and I am going to make lots of money out of you.”

The little tiger cub was very very frightened and he began to cry, so Carnival Man hit him with a big stick which made him cry harder. Carnival Man shouted at him to be quiet or his mother at the zoo would end up hurt.

“That’s much better!” Carnival Man growled and threw the little cub a piece of bad meat. “Eat it! Because, that’s all you’ll be getting for a week!”

When the Carnival Man went back into his run down old house, little tiger cub began to cry again. He was very, very lonely and scared.

He wanted his mother but she was nowhere to be seen.

The next morning at the zoo, Zoo Man went to feed mother tiger and her little cub and found the little cub was missing.

Mother tiger was very angry and she roared at Zoo Man to find her little son.

Zoo Man called the Police and told them all about the bad Carnival Man who had tried to buy the little tiger.

Detective Lady was put onto the case. She was very clever and soon found lots of clues.

Carnival Man had been careless. He had left his great big hat hanging on a gate.

By now, Carnival Man had put little tiger into his rusty old truck.

For many many hours he drove until he came to a big shiny shopping mall, where he was going to use the little tiger for his money making schemes.

Inside the mall was all bright and brand new. Carnival Man dressed himself up as a Photo Man and told the mall manager he was visiting to give the children at the mall a special educational talk about tigers.

But Carnival Man wasn’t telling the truth. He had lied to the Mall Manager who wasn’t very smart and let bad Carnival Man bring the little tiger cub inside.

Little tiger cub was prodded and poked by silly people who ooed and aahed at how cute he was.

They paid the Carnival Man lots of money to have their photographs taken with the little tiger who was now being made to be a cuddle cub.

He was very very hungry, and very sad.

All day and late into the night Carnival Man took photographs of silly people holding the little tiger cub and having smiles on their faces.

He was making lots and lots of money and didn’t care if the little tiger cub was scared and hungry.

He told the silly people that he was showing the little tiger cub so they could learn about something called conservation.

But there was one boy that wasn’t silly.

His name was Sam, and his mother and father were scientists who had taught Sam all about bad people like

“Hey Photo Man!” Sam shouted from across the big mall.

Carnival looked at him and said “What do you want little boy! I’m busy here!”

Sam folded his arms and said “The Policemen are looking for you Carnival Man. You stole that little tiger cub from the Zoo! My Mum and Dad have called Detective Lady and she is coming to arrest you!”

Carnival Man threw down the camera he was holding and said “They’ll never catch me!” and off he ran.

Little Tiger cub was left behind, so Sam carefully picked him up and held him. He was very scared and very very hungry.”

A kind lady at the Pet Shop found some kitten food for the little cub and helped Sam feed it to him until Zoo Man could come and pick little tiger cub up and take him back home to his mother.

Detective Lady was waiting for Carnival Man, and his rusty old truck.

She chased him in her fast police car, until Carnival Man finally pulled over and was arrested.

Dectective Lady marched Carnival Man off to jail where he could not wear bright colours or big fancy hats. Instead he had to live behind bars, just like his performing animals had to at his run down old house.

Zoo Man was very pleased to have little Tiger cub back and he named him Sam after Sam the boy who helped to save him from Carnival Man.

Zoo Man went to Carnival Man’s house and rescued all of the other animals.

He took them back home to his zoo and gave them lots of space and plenty of food.

Sam the boy visited his friend Sam the Tiger every day. They grew together.

When Sam the tiger was 4 years old, he was put on a special plane and sent to a special reserve in .

At the reserve he met a lady tigress called Suma who was the same age as he was.

They became friends, and then started a family together.

Suma had three cubs and Sam was very proud.

Sam the boy grew up to be a Biologist and went to to study the tigers.

Carnival Man never left jail, and all of the animals he had hurt all lived happily together at Zoo Man’s home for the rest of their lives.

The message in this story is: Tigers are endangered. Tiger cubs do not belong in shopping malls for people to hold,and have their photos taken with them. If you are told it is for conservation do not believe it. The conservation of endangered animals is undertaken by accredited Zoos and Organisations not individuals that exploit wildlife for profit.