Bailed up by a Terrible Trio and one black chook 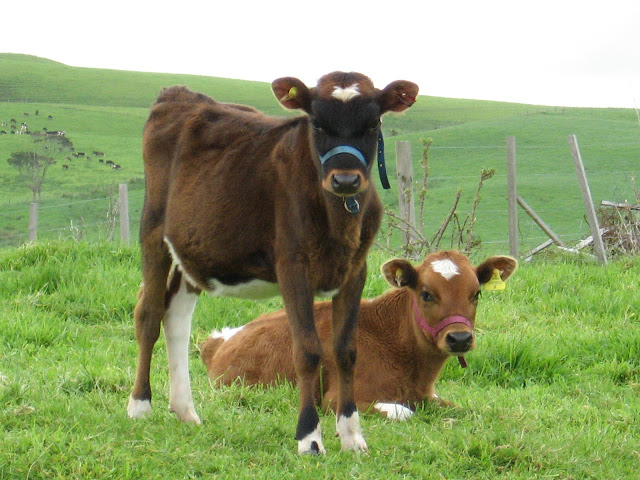 Playing 'mother' to three little hungry bawling bovines each morning and evening,  one got the feeling that it would never end.

Stream, Ocean and Micah the second were three calves that arrived on the farm back in 2007. Given to me by friends who we had loaned our hereford bull to cover the last of their dairy heifers.

Three little calves that needed two feeds a day and wait was not an answer. 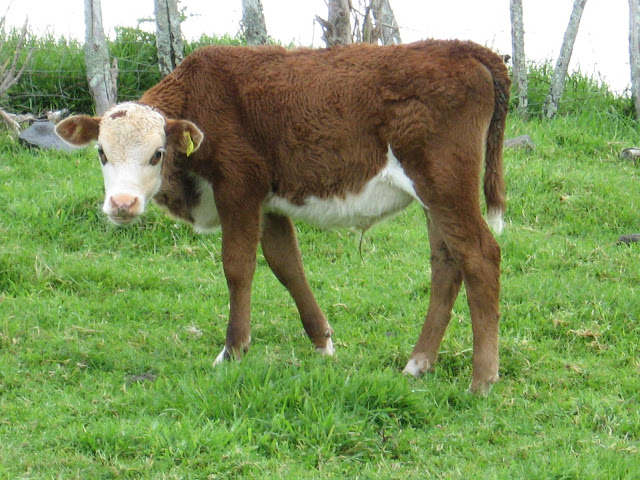 We left them to roam around. No point locking them up when there was only grass around the place and Grandma's newly built house up on her part of the farm for them to visit now and then.

One morning though the three of them went up there. Grandma awoke to find one calf in her fishpond eating her lily plants, one on the deck having a nice snooze, and the other happily chewing up a palm tree, so that it ended up with an entirely new architectural look. They were tricked into following the kids and I back down with what we called the 'false bottle' it was an old milk bottle with a teat on it and filled with water. Worked every time. Trouble was we had to run fast with it!

Each morning I'd get up get the kids to school then tie up all three calves and get their milk mixed up. I'd do Stream and Ocean first, then feed Micah the second aka The Guts with he other two tied back up so he could have his bottle to himself. It's the old saying with calves and kids for that matter.

Their eyes were bigger than their stomachs

As always I had my supervisor. Namely one small black chook with the name of Maggie May. Being of the personality that she was Maggie always kept an eye on everything. She ruled the place and that was that. Curious little calves soon found out that said little black hen had a very sharp little beak that could give a good hard peck when required. A few times they ended up with sore little noses from that very sharp beak.

I still recall when Feather the other chicken we had was there as well. She was either blind or absolutely dense. More than once she ended up being carried off hanging by the tail feathers from one of the calves mouths. I mean what a dumb chicken she was. Inaya called her the Dumb Dinosaur the chook was that dense.

When the terrible trio were about three months old when one morning, the kids went off to school and forgot to close the ranchslider.

As I recall, I still had the three feathered psychos still running loose around the place .  The calves used to chew on their feathers as well. Stupid roosters they were.

Sunshine was on the bench (nothing new with that sod), Maggie had walked in, and was on the table eating Michelle's toast when I went into my kitchen. Not impressed by it, but also wanting to get on with feeding the calves I started mixing up the milk ready to feed them all and decided I'd deal with the poultry invaders later..

There was just one wee slight technicality. I had forgotten to tie the terrible trio up BEFORE I started doing their feeds. Bad move that - very bad move. Idiot.

I was assaulted from all three directions by three hungry little bovines all wanting to be fed at the same time. Maggie in fright jumped on my head and sat there squawking while Micah the guts stuck his fat little head into the mixing bowl and tipped it all over the place. What a mess!

Yes they were in my kitchen! It was not much fun having a freaked out chicken on my head and three small bovines attacking me all at once. Sunshine just sat there on the bench covered in calf milk looking the poultry idiot.

Regaining my composure I managed to extract Maggie off my head and throw her out of the kitchen window. And then I had to deal with the Terrible Trio.

Extracting Micah off my leg was a bit difficult. He was chewing away as if he was the rabid hound of hell or in this case the rabid bovine from heck. Greedy little sod he was. I hauled him out by his calf halter and tied him up then nabbed Stream who by then had her head in the open pantry door and was eating a packet of biscuits. More mess to clean up. Ocean was chewing on Sunshine the roosters tail feathers much to his displeasure she tore half of them out. Stream was hauled out and tied up. Getting Ocean out was a relief. For Sunshine the feathered Psycho though he had a rather large gap in his pretty rooster tail.

He was booted out the door shut and the mess cleared up.

The terrible trio did get their bottles eventually. It only took two hours to mop up the mess.

It took me the rest of the day to stop laughing.