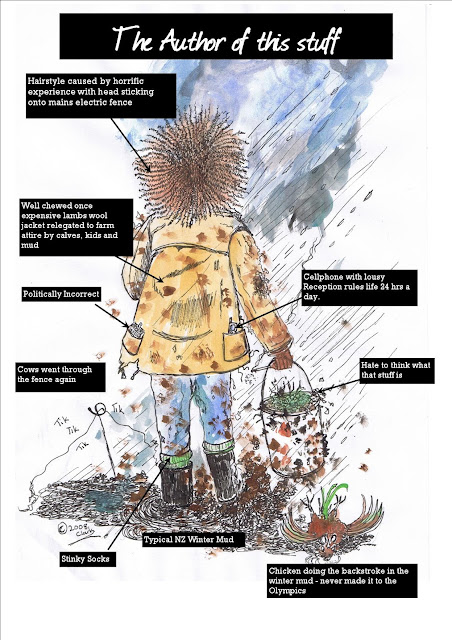 ,
I haven't blogged for a couple of weeks now. Last week I did something that made for a rather bent story, so to speak. Namely waking up on a cold Monday morning , booting the kids out of bed and getting on with the day. Yeah ...right. Mr Murphy and his laws decided to show up that morning. Oh yes indeed did Mr Murphy show up. It went like this. Had coffee, fed the horses. Told the idiot dog to put a sock in it because he was barking furiously at the cows (who were eating his dog biscuits I might add) and then went outside to go and clear the mailbox. Yep standard boring morning routine stuff. During the weekend we had high winds and heavy rain. So it was the usual with things blown everywhere, including the trampoline that had blown onto the driveway. Yes bouncing up and down on it with the car might have quite a sight I suppose, but it was in the way and needed to be moved. Do the straight back, knees bent and lift - to the sound of a loud crack and a lot of yelling on my behalf. You guessed it - I put my back out - badly. It hurt like blazes too. I had treatment last Friday. I'm still creaking along there. I suppose eventually I'll be on the straight again once I've stopped being bent. Well that's me for now. Keep on creaking...I mean truckin'.
Email Post