Mothers don't let your daughters grow up to be Cowboys 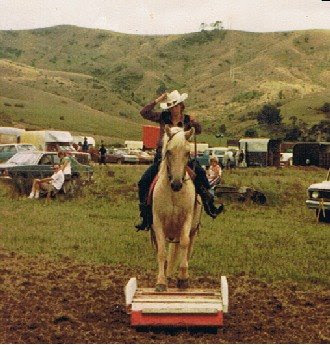 Yes that is me at seventeen competing in the Western Trail at the Helensville Agricultural & Pastoral Show in 1981 on a horse that bucked everyone off, a borrowed saddle, boots and hat. The jeans and the shirt were mine at least. The horse I rode was named was Timmy, eventually I bought him from his owners a couple of years later. He was such a neat little guy. I got a second prize would you believe even though I had only just started to learn Western and had dreams of going to Arizona marrying a rancher and settling down to raise a family. No it never happened as you know I'm still here in the country of my birth and a place of my own and yes I still do ride western - much improved since those days as you can see from the photo!
Email Post
Labels: helensville agricultural and pastoral show 1981 horses seventeen timmy western riding western trail