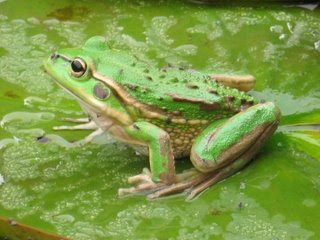 Still on the theme of critters. I got woken up at midnight to the sound of screaming - literally. One of the cats had obviously baled something up by the house so muttering less than nice things about our beloved pets I went staggering out to see just what the heck was going on. Something was screaming and the cat was having a great time attempting to nab the noisemaker. I thought it was a baby stoat -no loss since stoats are another unwanted pest we have to put up with. Then it moved. Not a stoat but a little Australian Bell Frog trying its best to escape death from claws and teeth. I like frogs, so I rescued the poor little guy from the miffed Emerald, put the frog in a container safe for the night, then released it this morning into the pond behind our house. Had the camera, so I took a couple of photos before my amphibious friend vanished to safety. Too soft for my own good. Hope the little guy makes it.
Email Post
Labels: australian bell frog cat midnight pond rescue