Mountain Gorilla - A Fantastic Photo by my friend Alley 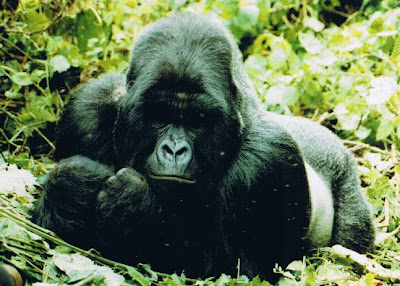 A good friend of mine Alley spent an entire year back packing around in Africa. Being a keen photographer she trekked all over the place including Rwanda just to get photos of the fantastic wildlife. She visited the Mountain Gorillas where researcher Dian Fossey had spent eighteen years trying to save the gorillas from poachers and souvenir hunters. Dian's life was featured in the movie "Gorillas in the Mist" 1988 starring Sigourney Weaver. Dian was found murdered the killer never found or identified. This photo is of a adult Silverback male Alley was able to photograph. These animals like so many others are critically endangered. It makes us want to take a look in our own back yards and see just what special creatures we have that should be cared about. Food for thought.
Email Post
Labels: african wildlife critically endangered dian fossey mountain gorilla photography rwanda silverback male