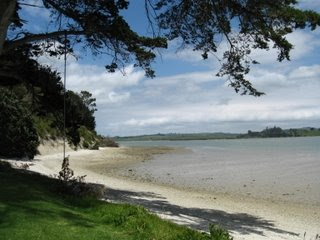 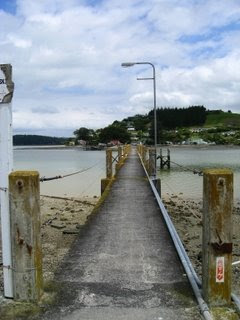 To deny we're not spoilt for choice when it comes to beaches would mean being told to get a life. Just ten minutes from our farm is beautiful Whakapirau Beach. It's a quiet little settlement located on the eastern reaches of the Kaipara Harbour. During the summer the kids and I love to go down in the afternoon and just chill out. Usually there's someone there we know. I always take my visual diary and scribbling away to my heart's content, while the girls take a swim or jump on the big rope swing tied to a big old macrocarpa tree down the Southern end of the beach. Every January they hold a regatta at adjoining Pahi. Everyone with a boat turns up and has a great time and probably one too many drinks in the process. (I'm not actually serious). A lot of history has happened in the area including a Maori war, a vineyard, a timber mill and a Dairy Company just by where the wharf is in the photo. Whakapirau itself means literally "Stinking Waters" This was due to the battle between Maori Tribes that occured there in the earlier part of the 19th Century. Enough said about why the name was given. Nothing smelly about Whakapirau now that's for sure.
Email Post
Labels: kaipara harbour Pahi whakapirau beach