Rodeo in Christchurch targeted by Protest Group - From the NZ Herald 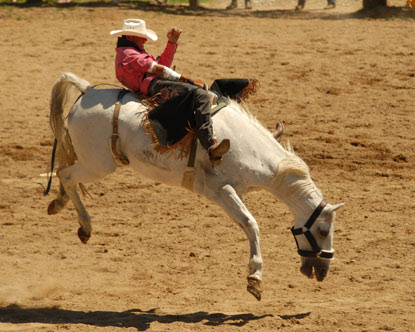 I read the article below on the New Zealand Herald Website. Debate over Rodeos and whether or not it should be banned has gone on for years. We have one at the Paparoa Agricultural & Pastoral Show each year. On my own personal level I have never seen any of the animals used ever mistreated or showing any signs of stress. The SPCA Inspectors are always on site to ensure the animals' welfare is being taken care of.

In the US the specialised breeding of both bulls and bucking horses is big business. Some of the animals are worth a small fortune. Professional Rodeo Clowns lay their lives on the line to keep the bulls from hurting the rider after they come off. An entire industry has developed from the concept. What would happen if suddenly overnight all of that was banned. A lot of people would lose their livelyhoods and damage the local economies of the areas concerned. Not a good thought.

I have no doubt there have been serious cases of mistreatment involved with rodeo events however that won't necessarily mean that all Rodeo events are in the same category.

All I will say is - our local show wouldn't be the same without the Rodeo coming to town, but that is my own personal opinion.

This article is from the NZ Herald

Auckland may have banned it, but rodeo is still riding high in Christchurch where an international event is spurring animal rights activists into action.

Lobby group Save Animals From Exploitation (SAFE) is promising protest action ahead of the International Rodeo being held in Christchurch this weekend - a feature of the New Zealand Cup and Show Week.

SAFE this year successfully lobbied the Auckland City Council to ban rodeo events from its land, in a first for New Zealand.

Councillor Cathy Casey said: "I disagree we should use animals as some means of entertainment."

The International Rodeo in Christchurch has attracted 39 of the world's best "cowboys and girls" from the United States, Canada, Brazil, England, Australia and New Zealand, in an event dubbed the "biggest wild west stand-off ever staged in New Zealand".

Rodeo exponents say the sport is popular, and animal welfare is carefully monitored.

But SAFE campaign director Hans Kriek said rodeos tormented animals for people's amusement, and sent the wrong message to children. Straps and electric prods were deliberately used to get horses and cattle to buck.

"They call it man versus beast. It's akin to the mentality that you see in Spain with bullfighting. We want to prove somehow we can dominate these creatures - and it's such nonsense."

Gary Jackson, of the Rodeo Cowboys Association, said that rather than being forced, animals were "encouraged to perform to the best of their ability", and some simply would not. His association was made up of experienced animal owners, and it engaged regularly with bodies like the RSPCA.

SEE ALSO Rodeos -Entertainment or Cruelty. This article gives a balanced account of both sides Thanks goes to Timespanner for providing this link