Dairy Display at the Matakohe Museum 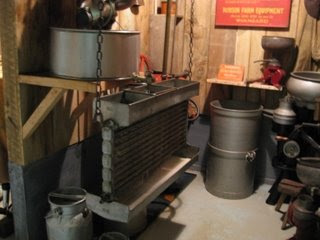 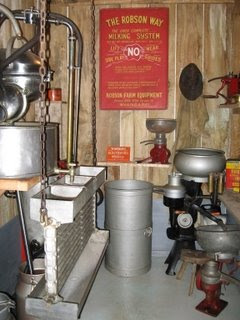 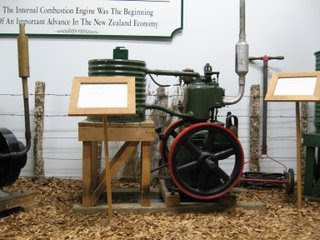 I must admit I have a love of Dairying History. No wonder with one of my Grandparents being a Dairy Farmer, a great Uncle who helped introduce the dried milk powder industry to New Zealand and a Great Grandfather who was heavily involved with the Co-operative Dairying in the early part of the 20th Century. That aside it's fascinating and I'll blame Timespanner for this. Lisa you can kill me later. This is one of the displays at the Matakohe Kauri Museum of an early milking shed. I took photos of the milk room equipment. The rest of the display was too crowded out with people (good for the museum). The old steam pump engine belonged to Victor Judd one of the pioneers of the local Maungaturoto Co-operative Dairy Company (it's long since been taken over the dairy giant Fonterra).
Email Post
Labels: dairy display dairy history Matakohe Kauri Museum nz history steam engine Victor Judd