Off the Farm - Kaimanawa Wild Horses 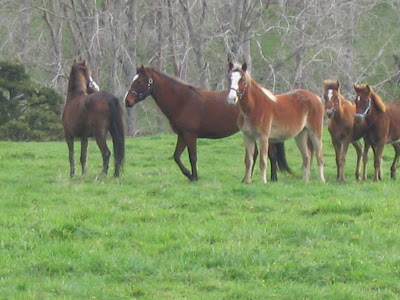 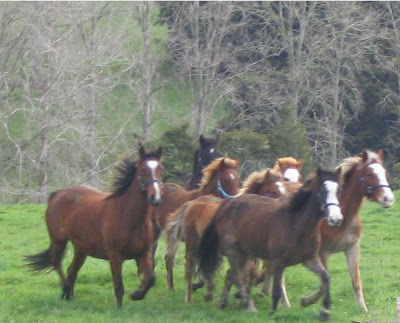 Last year in my role as editor of the local community paper I had the privilege of going out to a local farm to visit a band of wild Kaimanawa Horses that had only just arrived the day before from the central North Island. The Department of Conservation holds an annual round up of the Kaimanawa Horses deeming them a threat to our native plants and habitat. Naturally a lot of people have been outraged about the culling that has been going on. People consider the horses as part of our heritage. Too many times the media has reported terrible cases of where the horses were sent off to holding farms and left to starve to death. Better for those that can't be found homes to be put down humanely. Some end up being slaughtered for export meat and that alone has angered people. In the US Horse slaughter was recently banned - but it has resulted in many unwanted animals ending up with a worse fate than being put down. I'm a realist when it comes to things like the welfare of animals and what is really best for them. My oldest horse here is 28 years old and still not showing signs of slowing down just yet. I hope he just passes away quietly in his sleep, but if the decision had to be made for him to be put down that would be the right thing to do. The horses in the photo were full of worms and thin from lack of grazing in their home range. They've since all put on weight, and have ended up being great horses for their owners.
Email Post
Labels: central north island culling department of conservation kaimanawa ranges kaimanawa wild horses new zealand wild horses