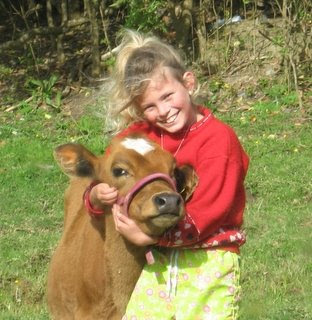 Inaya turned eleven at the end of August and now she is starting to grow up. Just like her Mum she has a serious flaw. She just loves animals and has decided she is going to become a wildlife vet. I was sitting here at the computer one afternoon late last year. We had the calves eating the grass behind the house and Inaya decided she was going to go and cuddle her calf Ocean. Ocean is Friesan-Jersey cross. She's now fifteen months old and still very tame. Yet another one that won't be leaving, since she is Inaya's special pet. It seems all of our calves are named after water. River though our first hand raised calf was named after the character River from the TV series Firefly. Yes I know we really are a little wierd around here. Must be all those possums we keep knocking off.
Email Post
Labels: Calf Inaya kids ocean pets