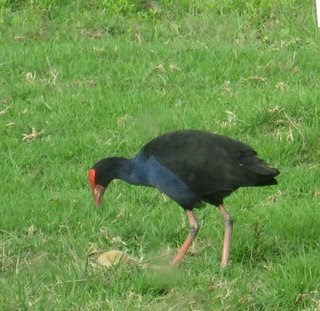 Mr Screech turned up today. Mrs Screech obviously wasn't taking the hint to shift her giant pink feet and get on over to hack off the idiot humans living in the box thing in the middle of their turf. A rock chucked over Mr Screech's way soon had him heading back down to see the missus and her little brood of black hairy chicks with giant pink feet. For once I had some peace and quiet after that. Most afternoons the Screech Clan come up to the house to terrorise the cats and the Terrorist who should be terrorising them instead. Not with those great big beaks snapping her way she wasn't. Here's a photo of Mr Screech. Nice birds to look at the Pukeko - but don't get fooled they can be nasty. They are now supposed to be trendy and quirky - ah...okay. I'll stick to calling them screeching nuisances for now. The trendy stuff I'll leave for New Zealand Tourism and their wierd ideas.
Email Post
Labels: giant pink feet Mr Screech pukeko