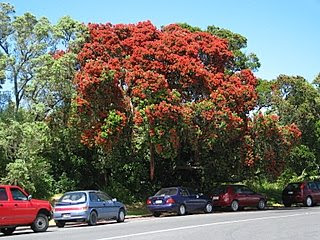 Our Kiwi Christmas Tree the NZ Pohutukawa Tree
Renie asked me what a traditional New Zealand Christmas was like. I had a long think about it and came up with this little Christmas story that happened when I was just 8 years old. My parents had a section up on the East Coast at Tramcar Bay on the Whangateau Harbour. Then all we had was a caravan attached to a strangely constructed carport that a friend of my Dad's had closed in and made into a place where we could all sleep and do our cooking. The section was up on a high hill over looking the harbour. We used to get down to the bay through a track my Dad had cut out with a spade and a mattock then he had tied a great big thick rope around an ancient pohutukawa tree which we used to swing on and jump into the water when the tide was in. So much fun then.

Christmas of 1972 was a memorable one. I come from a family of six children. Four other sisters and a brother made for a huge family and my Dad had two Holden Station Wagons to carry us all. Each Christmas we would put in six cats into the back of the yellow Holden Station Wagon then drive the sixty miles north to the Beach as we used to call it. This particular Christmas my Nana and Grandpa and a whole heap of cousins all decided to turn up. We had tents and another caravan parked on the section at the bottom of the driveway. Nana was a great cook and loved the traditional turkey roast dinner on Christmas night. My older sisters were set to work peeling all the potatoes and the other vegetables that Nan would roast in a big electric frypan and the turkey she had brought up was put somehow into the tiny benchtop oven we had in the carport part of the warry (our name for the rough as guts accommodation we had). Dad and Grandpa offered to cook lunch for everyone which of course Nana thought was a wonderful idea.

My Dad and Grandpa set to work sorting out bacon, eggs and lots of sausages to cook on the little stove we had. Grandpa asked Dad to get him some cooking oil for the frypan and Dad handed him over something in a big bottle that looked like the stuff. Grandpa then set busily to work cooking the sausages while Dad sorted out the other part of the lunch all of us were so looking forward too. Just one slight hitch. Grandpa was suddenly staring strangely at the sausages wondering why they weren't cooking very well. So did Dad and they still couldn't figure it out. My Mum though had already figured it out. Dad had given Grandpa the big bottle of dishwashing liquid and Grandpa had cooked the sausages it it! YUK!!!

The sausages ended up being used as fish bait. Nana and Mum kicked Grandpa and Dad out of their kitchen and for the rest of the day Grandpa could do nothing but laugh about his dishwashing liquid sausages!!

That Christmas day was lots of fun. The turkey and the roast vegetables were wonderful. So was Nana's traditional Christmas Pudding complete with old fashioned pennies all through it. Lots of custard and ice cream as well and of course the presents. We had a great big pine tree complete with home made decorations and a paper star on top that was put in an old tin rubbish bin and held up with concrete blocks. I can't remember how many were there that Christmas day but all I know it was a lot of people. The six cats wanted for nothing that day or the next with all the sneaky leftovers Grandpa kept giving them.

Grandpa, Nana and my Dad have all passed away but that memory of that crazy summer Christmas Day will never be forgotten.
Email Post
Labels: christmas day grandpa sausages