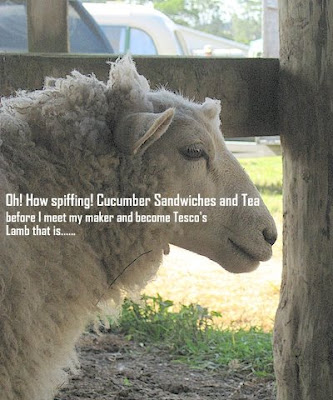 Sometimes I think stupidity can come in the form of a Tesco's Supermarket representative visiting Silver Fern Farm's Meat Processing facility, and for some strange and bizarre reason, that can only be known to those that are Tesco's Supermarket Executives (obviously it is top secret) make a dictum so ridiculous - it's beyond the realms of sane normal belief.

The pushers of Political Correctness are rubbing their hands with glee right now as men with rattles and waving arms herd sheep to their doom within the dark bowels of the Silver Fern's abbatoir. Yes you read right I said Rattles and waving arms. Dogs it seems aren't in vogue anymore because and I quote "no dogs should be used to muster animals destined to slaughter."

Excuse me? No dogs? In a letter to the Daily Telegraph by C.S Waddington of Canterbury this is exactly what happened. Waddington writes

People here are astounded. The relationship between a trained working dog and sheep is so customary and understood as to be almost symbiotic. For centuries dogs have been used to protect sheep, even in the absence of a shepherd. A sheep will happily graze next to a dog.

Now the shepherds and their dogs have been dismissed and replaced by men with rattles, waving their arms. It is difficult to imagine a more demeaning occupation.

Tescos have told Silver Fern Farms to stop using the dogs unless they can be retrained to be "more considerate" towards the flock.

Come again? More considerate? As in inviting the sheep to tea and cucumber sandwiches perhaps. Or maybe a nice meal of sheep nuts as a cherry farewell before the butcher's knife cuts their throats. In the end that is exactly what happens and I won't be politically correct about that fact or that I think our friend Mr Supermarket Executive is a complete and utter idiot. Being considerate to a sheep? Consideration in my eyes is a good working dog, quiet handling and a bit of good old stock know-how not applying some stupid pc crap in a real world situation. How often has this guy been on a farm - probably never. Dogs are dogs and a good working dog is worth ten bad dogs and a good shepherd is worth ten Tesco's Supermarket Executives. Well the dogs and the shepherds are now going to lose their jobs - that stinks.

The shepherds have reacted with outrage, and claimed up to 60 dogs have now joined the ranks of the unemployed.

My neighbour Rex would have some good words to say to Tesco's about their so-called rule. He'd call them a bunch of thick-brained idiots - the sheep he farms would be more intelligent. I agree. The animal welfare experts it seems were baffled by Tesco's stand

Welfare experts expressed bafflement that the centuries-old tradition of moving sheep around with the use of a scurrying, yapping dog could upset the sheep.

Absolute baloney! came the chorus of derision. In fact, says Ngaio Beausoleil, a lecturer in animal physiology at Massey University, we don't know what is more stressful to lambs to the slaughter: rattling, waving, shouting humans or barking dogs.

And baloney it is. Some good shepherds and some good dogs are going to be out of a job and all because they aren't being considerate - enough.

I think I had better go and get out those cucumber sandwiches now - the sheep across the road are getting hungry.... or I'll give the sods a good shove in the rear with my gumboots. Oh that's right that's not being....considerate.