A Very Sad End to the Day 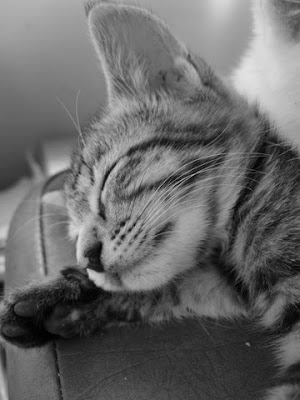 This morning I wondered where Yowie was. She hadn't shown up like she did every morning for her breakfast. Yesterday I had a bad feeling I wouldn't be seeing my little motor kitten the next morning. Why I don't know but sometimes we can have a connection to even the animals we have as pets. I had a special connection with Yowie. I miss her sitting on my lap and getting in the way when I'm trying to write something on the keyboard. By lunchtime that dreaded feeling had come that all was not well with little Yowie and that she would not be returning alive. The kids searched the farm for her and the side of the road but no Yowie. She didn't come when we called and there was no sign of her - anywhere. Tonight we had to go and check up on the old man who is off the farm at the moment and grazing on a neighbours 5 acres just down the road. I went into Maungaturoto first then on the way back towards our farm I slowed the car down and looked carefully along the road verges to see if Yowie was hurt or dead. Sadly I spotted Yowie just opposite our farm gate - dead. I had to drive down the road and sort out the horse then once we were done I returned home with the kids and stopped by the gate so we could retrieve Yowie's body. She had been hit by a car or a truck - we don't really know but fortunately she was intact which spared the kids seeing a horrible sight. I picked little Yowie up and gave her to Inaya who took her through the gate on a feed sack I had in the car. I won't pretend that the tears weren't real. I love my animals deeply sometimes too much but in this case that love was justified and right. We buried little Yowie just behind the house with an Olive tree along side to remind us of that little tabby kitten and her motor-like purr. She had a short life just five months old. Tomorrow I will have to tell our vet that Yowie won't be returning to be speyed in two weeks time. Yes it's part of life but also animals can touch our hearts in so many ways. I'll miss her very badly and no kitty will ever replace her I know that. I have lots of photos but I would rather have her here right now on my lap purring like the little motor she was. Bye Bye Yowie we'll miss you.
Email Post
Labels: cat Yowie