A Rainbow, A Fall over Chicken and a Kamakaze Calf 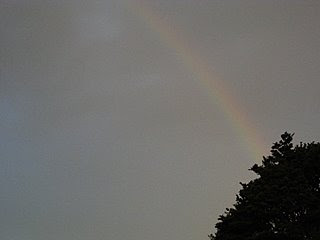 Yesterday at dawn the promise of longed for rain came with a rainbow then the sun burnt it off... 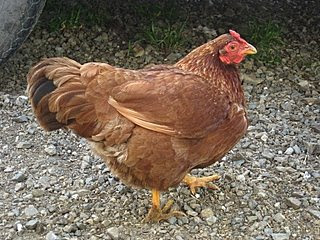 Little Picken the Chicken is a fall over chicken. Every now and then my favourite little red hen has a flop over moment then has trouble getting up again. Thoughts of horrible diseases and other causes came to mind but a search of the net on poultry diseases came up with a big zilch there. The kids of course were nagging at me to take the chicken to the vet - not at $65 plus just for the after hours consultation fee I wasn't. I already have very expensive chicken and that's Maggie but another one to add to the collection - no way. So wilting in the summer heat I went off to think about the other possible cause of the little chicken's problem. 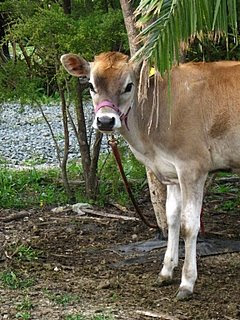 In the meantime the meantime a Kamakaze Fresian calf came through one of our gates jumped in with the cows and the bull and all hell broke lose. The Terrorist got out of her paddock bellowing for the other calf to come visiting. Micah the bull of course suddently took and unwanted interest in this new heifer and the kids were yelling at the top of their lungs. They might make good opera singers the way those two were carrying on. Muttering unpleasant things about crazy kids, nutty calves and fall over chickens I had to go up there to the top of the hill and sort out the chaos. Micah was not pleased he had missed out on yet another heifer.
Meanwhile the Terrorist had found herself a giant weed to eat (thank goodness) so I was able to shift the older cattle into another paddock and leave the Kamakaze behind. She's bellowed all night ....growl. The Terrorist was caught and taken back down the hill and tied up somewhere else away from the trouble maker. Peace and quiet there for the moment at least

And on top of everything else Emerald decided to bring in a little wax eye she had caught and leave it briefly on the kitchen table - that was until Dream made a move to nab it. I had a cat war ground in the kitchen and a dead bird which I tossed outside and the cats with it. Then finally the lightbulb came on. Only one other cause for the little red chicken's balance problem. A Vitamin E deficiency. Sure enough a check on a couple of websites matched the symptoms. I've thrown some Vitamin E and A into the chicken's water. In a few days she will be right again. 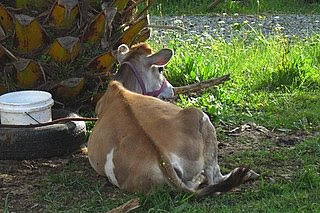 And today is going to be another very very hot day... Hope everyone has been having a great New Year. With this heat I think I'll go and climb into the freezer for the day. Ice blocks anyone?
Email Post
Labels: calves chickens farm madness