This really would get anyone angry - 'Protesters: Eating Cats Shameful and Cruel 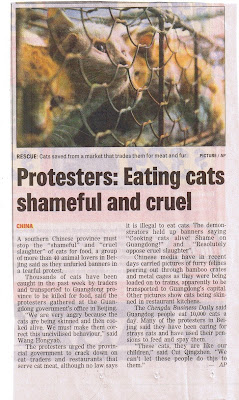 I cut this clipping out of the Northern Advocate from last Saturday. My kids were disgusted and asked me to post this up. Eating cats has been a centuries old practice in China. Now modern times have caught up more and more people in China are saying the practice is both cruel and abhorrent. Because I'm in the media part time I tend to post stuff up like this. I've retyped the article so you can read it better. I'd like opinions on this one.

A southern Chinese province must stop the "shameful' and "cruel slaughter" of cats for food, a group of more than 40 animal lovers in Beijing said as they unfurled banners in a tearful protest.

Thousands of cats have been caught in the past week by traders and transported to Guangdong province to be killed for food, said the protesters gathered at the Guangdong government's office in Beijing,

"We are very angry because the cats are being skinned and then cooked alive. We must make them correct this uncivilised behaviour," said Wang Hongyao.

The protesters urged the provincial government to crack down on cat traders and restaurants that serve cat meat, although no law says it is illegal to eat cats. The demonstrators held up banners saying "Cooking cats alive! Shame on Guangdong!" and "Resolutely oppose slaughter".

Chinese media in recent days carried pictures of furry felines peering out through bamboo crates and metal cages as they were being loaded onto trains, apparently to be transported to Guangdon's capital. Other pictures show cats being skinned in restaurant kitchens.

The Chengdu Business Daily said Guangdong people eat 10,000 cats a day. Many of the protesters in Beijing said they had been caring for stray cats and have used their pensions to feed and spey them.

"These cats, they are like our children," said Cui Qingzhen. "We can't let these people to this to them."

You can also read about the Campaign to stop the slaughter in China of Cats and dogs at the Sirius Global Animal Organisation Website. WARNING ON THIS SITE THE IMAGES ARE VERY GRAPHIC AND MAY UPSET. The stories there are disturbing and heartbreaking. I would like to see comments on this. What do you think?
Email Post
Labels: big cats cat slaughter cats for food china eating of cats