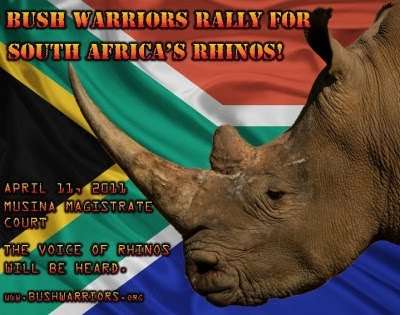 Conservationists will gather for a peaceful demonstration to speak out against South Africa’s rhino crisis.

Bush Warriors has organized a peaceful demonstration to be attended by conservationists from around South Africa, in order to speak out against the nation's surging rhino crisis. The ‘Bush Warriors Rally for South Africa’s Rhinos’ will take place in front of Limpopo’s Musina Magistrate Courthouse on 11 April, 2011, the trial date and location of a high-profile case involving suspected members of a rhino poaching syndicate. The non-violent protest will provide citizens with an opportunity to voice their concerns about the poaching issue, urge the judicial system to take a firm stance against poaching by enforcing strict punishments for offenders, and to assert that these criminal acts will not be tolerated by society.

Bush Warriors, a non-profit organization committed to raising awareness about global wildlife issues, is calling on the public to attend and support the rally, in order to serve as a voice for South Africa’s imperiled rhinos. The protest will demonstrate national and global support for the South African government's intolerance for rhino poaching, setting an example for the world. It is hoped public outcry will bring justice for one of the nation’s most economically important assets, which are threatened by rampant illegal poaching.

Organized crime syndicates are the primary forces driving these atrocities, operating with flagrant disregard for the law. They are commercial in nature, exploiting South Africa’s natural resources for immense profit at the expense of the government and private game farms. It is critical that these crime rings be targeted by law enforcement, if rhino poaching is to be halted.

The case to be tried on the day of the rally illustrates the importance of focusing efforts on these organized crime syndicates. The suspects in the 11 April case include well-known game farmers, veterinarians, and professional hunters from within the conservationist community and are believed to have worked together to carry out large-scale rhino poaching operations. Following the bailed release of the eleven individuals, authorities found some 20 hornless rhino carcasses on farm property belonging to one of the suspects. The case has drawn international attention and could be the tipping point wildlife supporters are hoping for in the battle to protect rhinos.

In 2010, poachers slaughtered 333 rhinos in South Africa, including some ‘Critically Endangered’ Black Rhinos. Holding a large majority of the world’s White and Black Rhino populations, the nation serves as a major tourist attraction for those wishing to see one of the most revered of Africa’s ‘Big Five’. Citizens, stakeholders, and conservationists from around the world are deeply concerned about the future of these species. Their message of intolerance for crimes against rhinos will be underscored if the judicial system takes a paralleled stance in the upcoming trial. Should the proceedings rule in favor of stringent punishments, the stage will be set for similar cases in the future and will send a bold warning of the consequences for illegally killing rhinos or contributing to these acts.

All who feel strongly about protecting South Africa’s rhinos and tourism-based economy are strongly encouraged to gather peacefully for this demonstration and to make their voices heard by the court, the government, the criminals, and the world. This is the first time in history that something like this has been attempted for these animals. Bush Warriors welcomes additional support for this historical affair, including filming and photographing of the event, providing transportation from various locations across country, and supplying printed Bush Warriors materials for the rally.

For more information on the event, the poaching of rhinos, or Bush Warriors, please visit their website or contact them at:

Graphics promoting the rally are available upon request or by visiting the link above.

1. Bush Warriors is a non-profit organization focused on raising awareness about global wildlife conservation issues, with special attention paid to poaching, bushmeat trade, and illegal wildlife trade. Bush Warriors is also developing on-the-ground projects that will be established to address these issues and halt destruction of nature.

2. Rhinos are targeted solely for their horn, which is now worth far more than its weight in gold. Demand for the horn comes from almost exclusively from East and South East Asia, where it is used in traditional medicine, despite scientific studies that have proven the substance to be void of any curative properties. Rhino poaching has now reached historic proportions to supply this demand. On average globally, one rhino is now being killed roughly every 21 hours.