Take your filthy hands off my Serengeti! #2 Lions are not floor rugs 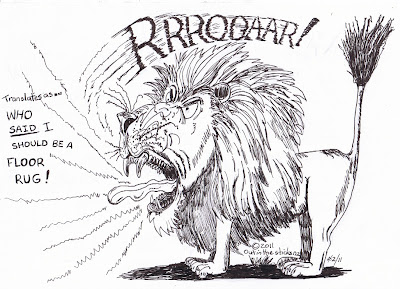 Lions are supposed to be the King of the Beasts right? Apparently not anymore. In Africa the lion is fast disappearing. From over 100,000 to a mere estimated 23,000, there aren't so many left. The African Lion (Panthera leo) is now listed as vunerable on the ICUN Red List

Many have died from Bovine TB, Canine distemper and poisoning. Populations have been reduced by human encroachment and hunting. 23,000 may seem a lot but given the vastness of a continent the size of Africa it isn't very many at all.


Meantime trophy hunting is also adding to the depopulation of the African Lion. Lion Aid a UK based organisation has a petition circulating at present to have the trophy hunting of lions banned. Perhaps I'm biased - but after getting to know the lions at Zion Wildlife Gardens over the last couple of years there is no way I would want to see any of my lion friends end up on some hunter's wall or as a rug on the floor. Lions aren't floor rugs they are a living breathing and very much an essential part of Africa's natural balance, just as the wolf is in Europe and North America. Remove an apex predator from the environment and the natural balance is completely changed to the detriment of the entire ecosystem it once inhabited.

If the Lion vanishes, then will people be wringing their hands a year after the last lion has gone and say 'We wished we had saved them." Think about it. After the last Tasmanian Tiger died in September of 1936 by 1939 articles were appearing in the newspapers lamenting the marsupial's loss - by then, it was far too late. The Tasmanian Tiger was lost forever - all because of a campaign of willful extermination, and a lack of resolve to save this now lost species. Will the African Lion go the same way. Food for thought.

And the cartoon at the top is my way of saying Take your filthy hands off my Serengeti! My cartoon animal army is growing - on the cartoon Serengeti there'll be no hunting allowed. Let's hope in the real world somewhere there is a will to prevent the lion's loss.
Email Post
Labels: african lion extinction trophy hunting