Trip to the Big Smoke - Part 4 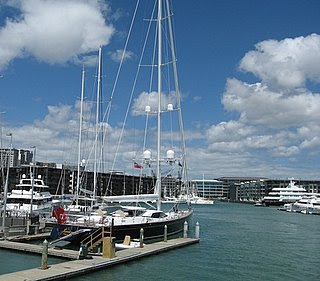 Leaving the Viaduct Harbour you can see all the apartment developments in the background. On the left are all the big charter boats and yachts. Got loads of stash, charter one of them and go around the New Zealand coast and see the sights. But if you're broke like I am, well just accept the invitation to a harbour cruise instead.LOL! 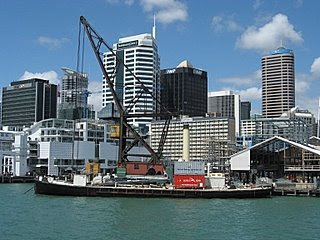 Now out of the Viaduct Harbour and passing the rear of the Auckland Maritime Museum. The old steam crane Rapaki now now moored at the end of the Maritime Museum has a history all of its own. She's a great old boat and interesting enough to take a closer look at: Here's her info from the NZ Maritime Record

Dimensions
She was built of steel at Paisley in Scotland, by Fleming & Ferguson Ltd. and was equipped with a crane constructed by Sir William Arrol & Co., the builders of the Forth Bridge.

The Fleming & Ferguson yard and engine works had gained a world-wide reputation for quality small ships and steam reciprocating machinery. On 24th December 1925 Lyttelton Harbour Board ordered the 80-ton self-propelled floating crane RAPAKI for £42,000 to meet the port's demands for a heavy lift crane.

Four months later, on the 9th of April 1926 under the Scottish delivery master, Captain H. Liddell Mack, she made her delivery voyage to New Zealand under her own steam. The voyage, which took 109 days via the Panama Canal, was an eventful one, and RAPAKI faced a number of storms and shortages of food and coal. She was believed lost for a time when she almost ran out of coal on the East Coast of the North Island, eventually limping into Gisborne. Finally RAPAKI arrived in Lyttelton on 27th July, during a strong southerly gale and high seas. After a period of maintenance, on October 14, 1926, she was ready to work.

RAPAKI spent most of her working life at Lyttelton but saw war service in Auckland, and in the Pacific. She was retired from service in 1988 and purchased by the NZNMM in 1993

- Text by the National Maritime Museum Passing just further along the city skyline starts to open up. On the right is the Rapaki, centre the Auckland Sky Tower and the ANZ bank building on the left...Part 5 next gee this is a looong post.........
Email Post
Labels: Auckland City Rapaki viaduct basin