Trip to the Big Smoke - Part 5 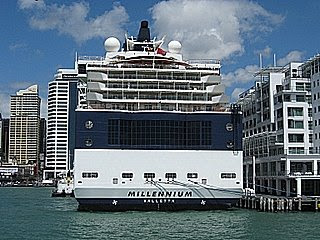 Passing by the revamped Princess Wharf the stern of the Millenium looms into view. Her huge size has attracted a lot of attention and why not when she is such a stunning vessel. 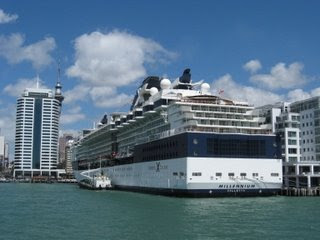 The large tug tied up along side of her was tiny in comparison to her huge size and yet it had towed her so easily into port.... 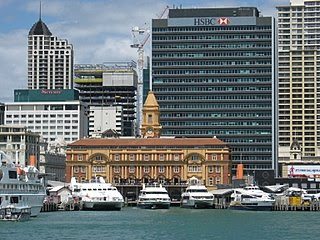 And just on the other side is the wonderful Auckland Ferry Building. No longer in use for the purpose that it was built for, but thankfully lovingly restored ,and one of Auckland's most special landmarks. The Fuller's Ferrys to Devonport and other destinations around the Auckland Harbour can be seen taking on passengers for the next trip over. Here's the history behind this wonderful old piece of early 20th century New Zealand Commercial Architecture as written by Martin Jones from the Historic Places Trust

The Ferry Building is one of the most imposing port buildings in New Zealand, and testimony to the importance of water transport in early twentieth-century Auckland. Erected by the Auckland Harbour Board in 1909-1912, this ornate structure was intended to be a focus for the extensive ferry network entering and leaving the city. It was also intended to raise a regular income for the harbour board, as it was designed entirely for lease. Its construction was part of a costly reorganisation of the docks, which included the building of the ferro-cement Queen's Wharf. These works were undertaken by the city in a bid to retain its position as a leading Southern Hemisphere port.

Designed to reflect the aspirations of the project, the imposing facades of the four-storey building were modelled in the Imperial Baroque style. Its prominent central tower was a focus of harbour life having a time ball, later replaced with a clock and siren, to regulate activity on the wharves. The building initially housed the headquarters of the two main ferry operators in the harbour - the Devonport Steam Ferry Company and Takapuna Tramways Ferry Company. Later tenants included trade unions and consulate offices. The construction of the Auckland Harbour Bridge in the 1950s dealt a major blow to maritime activity on the wharves, after which the building deteriorated. It was refurbished in 1986-1988, when its interior was gutted, strengthened and converted to office and retail use.

The Ferry Building is significant as a striking and monumental piece of architecture, whose scale reflects the importance of civic authorities in the early years of the Dominion (1907-1947). It is a powerful reminder of the importance of ferry transport in the early twentieth century, and the role played by the wharves in the social and commercial life of the city, particularly until the 1960s. It is of value as tangible evidence of the dock improvements undertaken in the early 1900s, and as one of the earliest office buildings in Auckland built entirely for lease. It is also significant for having been a familiar landmark for nearly 100 years, instilling a sense of place and identity in the everyday lives of Aucklanders travelling in and out of the city over several generations. The Ferry Building's valuable visual contribution to the city's waterfront is enhanced by its proximity to other historic structures, including those in the surrounding Harbour Historic Area and nearby Quay Street Historic Area.