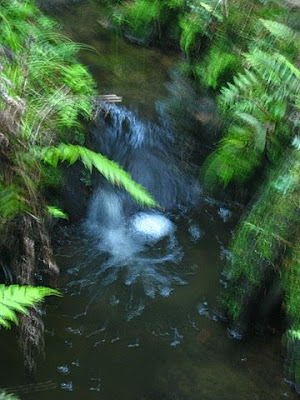 I'm wondering at that title..hmm. You read lovely posts about taking the dogs through the forest exploring nature and all the wonders it beholds. But I don't have dogs I have cats that walk with me. Well not this time..this time I walked my cow? On the way I took this shot - out of focus but I liked it enough to keep it for now. This part is down further on the farm into the native bush - with the rain in recent days we've actually now got flowing water once more instead of dried nothingness with the poor fresh water crayfish gasping their last. We rescued heaps over summer and put them into the big dam. Lucky we did or they would have all carked it - softy aren't I. Too soft. Walking your cow is a fine art I think. Patience...that had to come in spades. River was still in the bush long after the others had come up when I called so I had to go looking for her. 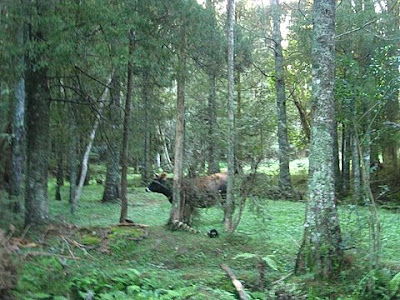 I found her down amongst the trees on the other side of the stream and River wasn't in any hurry to leave. So after trudging through knee deep mud and heck knows what else I made it over the other side and took my cow for a walk - literally. Unlike most cows River has remained very very tame and follows me anywhere. She still thinks I'm her mother - which is a problem when the former baby weighs several hundred kilos, has very sharp horns and is expecting a baby herself. Grandma to a cow..okay anyone called the men with the white coats yet? She followed me right through the bush and back into the paddock where I wanted her. If I say wait she waits. If I say come on River will follow. And they say cows are dumb? Not that dumb. Whenever the grass runs low River will bellow her head off until I get my lazy backside moving and change the cows paddock. How's that for a cow having brains. I don't need to chase her or the others - except for Stream. Now and then Stream decides to be difficult. Show her the cattle stick and she's suddenly doing as her told..wonder why.... 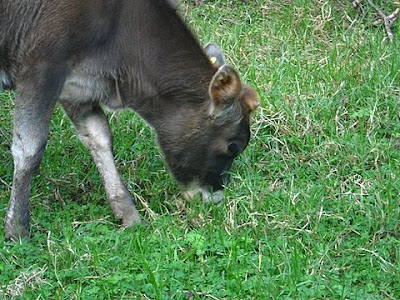 The Terrorist turned 9 months old on the 29th of April. Still very very cute and very very small even for a Jersey. Technically she should have gone on the bobby calf truck to the meatworks at a week old - which is what happens to the bull calves on large dairy farms plus the heifers that aren't going to be economic to raise. People say it's cruel to kill little calves - I can think of worse things. Some places overseas apparently keep calves in crates? Raise them for a few months then send them to slaughter. I'd rather see them put down while they're still small. Last year when Gilly turned up with the Terrorist I told her to put the calf back in her truck and put it on the bobby truck - she was so small! Anyway the kids were the ones that made Mum end up taking the little calf in and the Terrorist became my twice a day task..groan. No she'll never leave. And she'll be just like River. I won't walk one cow there'll be two. 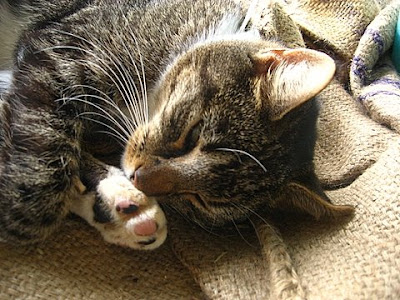 Emerald had been sick for the last ten days. In the end I took her to the vets last Friday. After many doses of antibiotics, clawed hands and lots of growling for the last few days the kitty has finally improved. It turned out she had been eating grass and sticks - so a big dose of Kat Lax did the trick. Enough said there. She's happy again now and I'm not getting ripped up by her very very sharp claws. I took this shot the other day. Emerald had been sleeping a lot - now she's better I think Sasquatch is going to be picked on again. 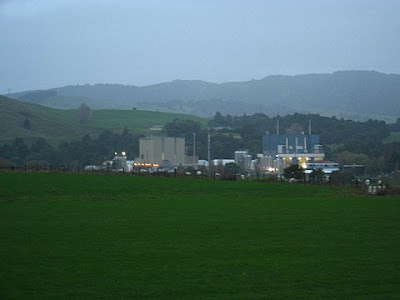 And finally we got the paper sorted out finished and printed down at the Maungaturoto Country Club. It's not the New York Times but our community enjoy reading it - I give my copy to Mum. Pointless reading it twice!LOL. This shot is of the Fonterra Dairy factory taken from the Country Club. It's the towns main employer. As I recall it's a dried milk powder plant rather than a town milk supply one. I took it just on dusk and it was just starting to rain. Tina got the printing done (she's a real trooper) and I guess the paper will be out today...Mum will be looking forward to her read. I'll be looking forward to another couple of weeks rest..until the next lot of deadlines that is..mutter. Hope everyone is having a happy day or has had one. Don't forget to check out the Sense of Wonder GLOBAL Competition
Email Post
Labels: 15kg terrorist cat cow emerald farm nature River vets