Packing Away the Ovines - literally (revisited)

This story is about two sheep that came onto our farm last winter from the side of the road. Believe me they weren't wanted.Sheep Farmer I'm not.
Rachel, Amy and Lisa had already read this story on another blog of which shall not be named. I wrote this one last year. Read this one if you have had a bad day and need a good laugh. It's one story I'll still be laughing over for another few years. . Story below. 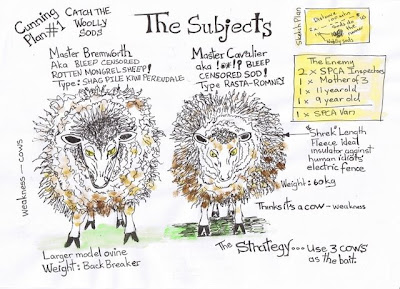 This post is literally about packing away a certain species known as ovine aka sheep into the back of an SPCA van. Well they were close to making it there after busting out several of insulators and letting two of the heifers out. Let's just say my mother wanted a very big gun when she got home and found her newly planted garden turned into the exact replica of a WWII battle field. The cause all the havoc - two walking carpets with fleeces several inches long no set of shearing blades would get a look in on. After having a chat with the local SPCA the two girls Kyra and Rachel showed up one cloudy winter's day to tell yours truly they had a nice kind home for our unwanted woolly ovine pals. I hate sheep. Cattle I'll take any day over those dumb useless ovine creatures then again they did give us a few laughs. Problem - catching the beggars. But wait...I had a cunning plan...

The second part of this sorry little saga begins with..Kyra and Rachel from the SPCA turning up with a van. Well I'm used to seeing sheep in stock trailers not..a van? They eye the two woolly sods staring back up there on the hill.........as for me well I'm used to dealing with sheep and their obnoxious habit of running everywhere but where you want the sods to go. I had a plan so cunning ..and to quote the famous Black Adder himself

"I have a plan so cunning you could put a tail on it and call it a weasel." Thanks Black Adder.

The cunning plan involved the following.
And the story continues. Kyra and Rachel headed up the top in their van much to my poor mother's dismay that perhaps this visit wasn't about anything good. No all good - thing was would the cunning plan work? I follow with kids. Head over to Terry's place -close off the gates and open up the yards. Head back to where Rachel and Kyra a now attempting to round up the two woolly sods. No need I tell 'em. Cows are suspicious of the two new humans in their paddock..and won't shift out. Of course they won't they don't like strangers - but love their "mummy". Easy to solve. Call cows - cows follow - woolly sods do the typical ovine follow the leader act..heh heh heh..... Get cows into yarding paddock with woolley sods now realising they have been duped..and attempting to do the runner. Unsuccessful of course. We yarded the sods!!! Cut out the now hacked off ovine beggars and ran them up the crush. Now the fun part.....getting the heavy woolly beggars into the back of the van. Master Cavalier was first on the list. Nabbed him by the wool rope on - Kyra and Rachel both trying in vain to shove said sheep into the van. Help required. Two on back end while avoiding being crapped on - one attempting to take front end. Trouble was the fleece on the sod was so long we couldn't find the legs. Solution tip sheep over - bad idea - sheep ends on standing on head. Reversed sheep back. Sheep sulks. Won't move....darn. Kyra can't get in to pull sheep forward. I'm smaller get in with sheep. Grab ears and pull head forward. Find a leg...move leg. Grab fleece..sheep heavy...shove mutter..yank..ouch my back...Kyra and Rachel shoving from sheep's rear end.....ten minutes later...sheep now in. I sit on sheep. Comfortable...take rope off sheep get out. Lock in first sheep. Back now killing me. Everyone totalled. Now for the next one....Three grab sheep two (Master Bremworth) Lift sheep off ground...our aching backs.....are...killing...us....mutter..whine..complain..Sheep gets the drift. Stands up on front legs. Gumboots used to shove sheep in the rest of the way. Sheep locked in....mission completed. Kyra and Rachel get in van and drive away with the two woolly sods sulking in the back. I won't miss them.
Email Post
Labels: farm sheep story winter