While dealing with a fat hand sandwich... 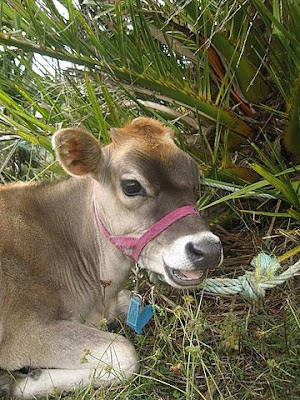 Turning Seven months this week the Terrorist is growing up!
I got to thinking about how badly that rotten old German Wasp was going to pay for stinging me in the finger. Oh yes that nasty old wasp and its little nasty brood are going to pay for certain. My left hand looks like fat ham sandwich one of those cartoon type of hands you see in the Disney movies. First time I've ever had my entire hand swell up from a wasp sting and what was I doing? Trimming up the palm trees on the side of the driveway when Madam Nasty decided to pay my middle left finger a personal and very painful visit. She got me a good one. The language I used was not politically correct - even the cows went into hiding as I stomped back up the driveway in my gumboots cursing every ancestor that stroppy old wasp had. After sorting out the painful sting with vinegar I watched my hand swell up to the size of a football. It's slowly going down now but it stopped me from getting the stuff I wanted to do done. The kids had to help me do dinner last night mutter...at least we got to have it I suppose.. Tonight I get my evil vengeance with a spray unit full of Carbaryl on the wasps and hopefully not on me in the process. 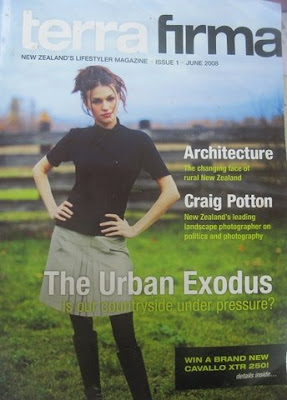 After sorting out the dinner and the fat hand problem (it's still fat growl) I sat down to thumb through a rather classy glossy publication that was published last year. It appeared in my rural mailbox one wet winter's day last year. Nice layout, talented writers but....I remember muttering to myself at the time nice but it won't last long..the reason for that little notation..people move to the country to get away from the urban stuff not hold onto it. Maybe I'm wrong. Most of the folks I've met during my travels have moved onto lifestyle blocks for a complete change of lifestyle and pace. I don't have post and rail fences or a huge fancy executive home. Mine is just over 1200sq feet built in 2004 and it's downright comfortable. As for the fencing...well that's down to steel posts and a thumper. I've got twelve acres full of weeds which I'm still hacking away at, lousy pasture, a soil PH of 8.6 so the poor old citrus trees I do have planted have to be fed loads of magnesium and cow dung to keep them happy. I compete with rotten old possums, chickens that love to dig up everything I plant and the cows taking advantage of a short in the mains electric fence. My lawnmower is the Terrorist, two horses, and four adult cows. As I thumbed through the pages I took note of the $8000 caravan like thing which is a great designer idea, but again what use was it to me? I could do with a new engine for my gas guzzler of a 4WD. As for the outfit on the front cover...ah okay really classy and stylie but where would I wear it? Auckland for sure but not here in the back of the sticks. No - gumboots are the main footwear I'd break the heels off those gorgeous boots in the picture chasing cows through the mud. Sadly there have been only three issues, but I think it's more for those who really do want to stay connected with the city - for those who are in the rural way so to speak nice but maybe not quite hitting the old centre there.People did like it. Worth a read of the articles this talented team have produced check it out here.
Email Post
Labels: 15kg terrorist lawnmowers magazine stings wasps