It's chaos around here! (What's new?) 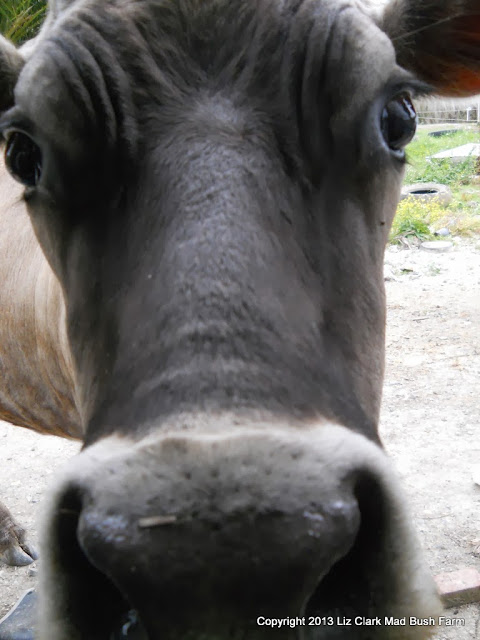 I figured out I hadn't blogged for a couple of weeks. Why?Just way too much happening, because here it's summer, near the end of the year and things are nuts. I came home late yesterday afternoon after a long couple of hours drive. I'm barely home for an hour the phone is ringing, kids want stuff signed, and later on there's a meeting on at school at 7 pm. That thing called life sometimes just gets a little too busy for my poor old brain to keep up with. And on top of that I'm attempting to have a breather with a cup of coffee and a newspaper, and what sicks her nose into my nice little world of Ah bliss.......and all of that kind of relaxation type stuff..yes that wet slimy nose belongs to the Terrorist. Normal sane people have cats and dogs for pets or even a pony. I have a cow. 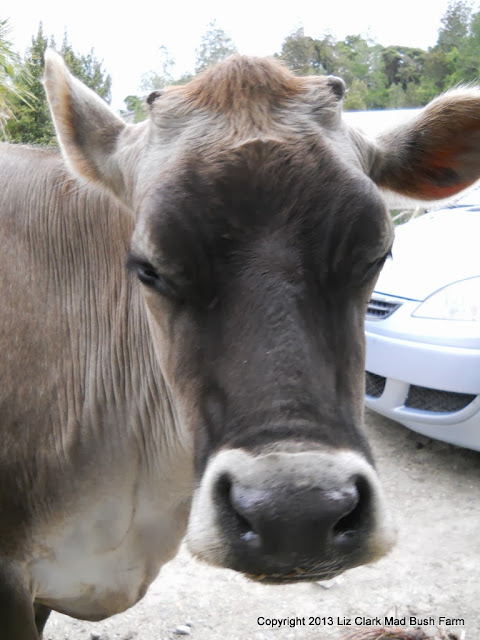 She likes to keep me company whenever she can. I got licked of course. Cow Slime isn't exactly going to make a hitseller of a skincare product any time soon. When she got a little too much I shut the ranchslider. She didn't like that much. 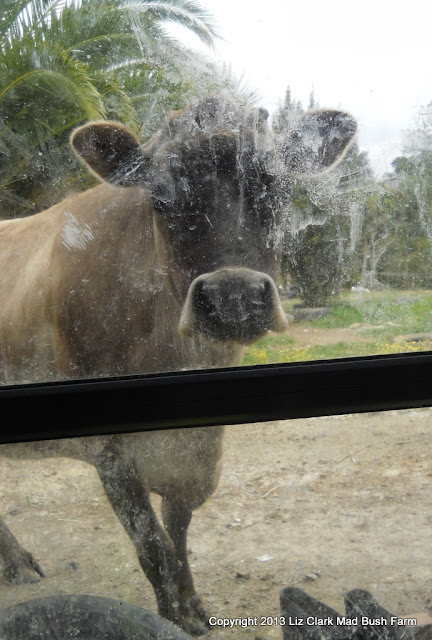 You can see cows don't make very good window cleaners. Neither do cats with muddy paws plastered on the glass, or horse noses breathing snot all over the place. Paw print, cow slime and horse snot will never make the grade in the natural cleaning product range. I better clean my windows again I suppose. 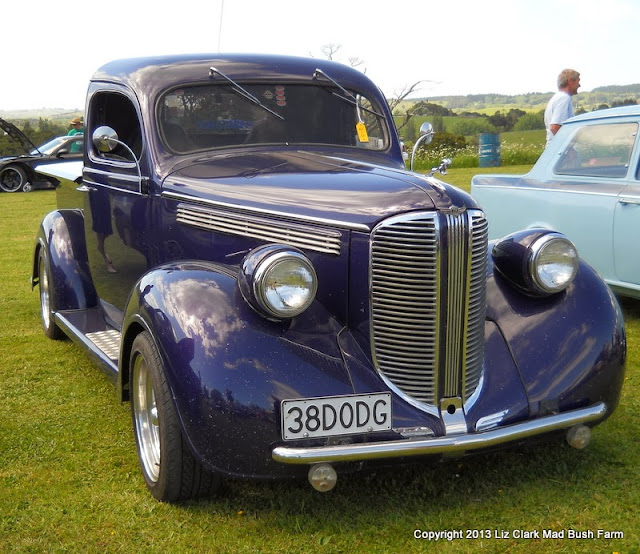 Last weekend my kids' school had put on a car and bike show called Wheels on the Field. Having grown up with cars because of my dad being in the trade naturally I gravitated towards the irresistable lure of big V8 engines and old pick up trucks with stunning paint jobs and a price to match.  I loved this Dodge '38 pickup . I wanted to take it home, but reality comes into play on that. But I can look at least. 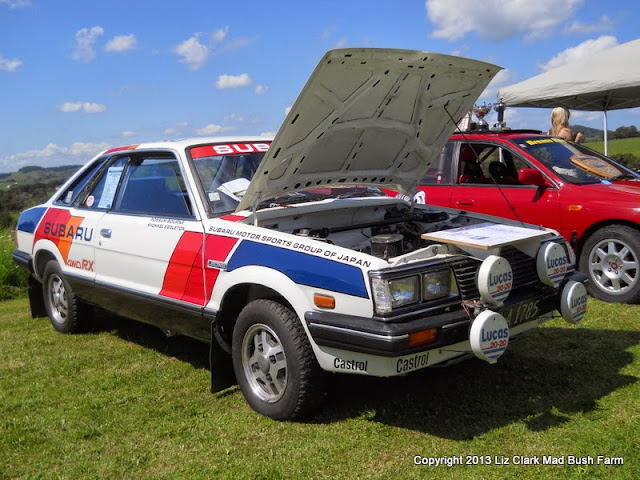 Possum Bourne's Subaru  rally car was also on display. "Possum" aka Peter Bourne was a world class rally driver. He drove for Subaru for many years, before sadly he was killed in a tragic accident in 2003 in the Climb to the Sky challenge. 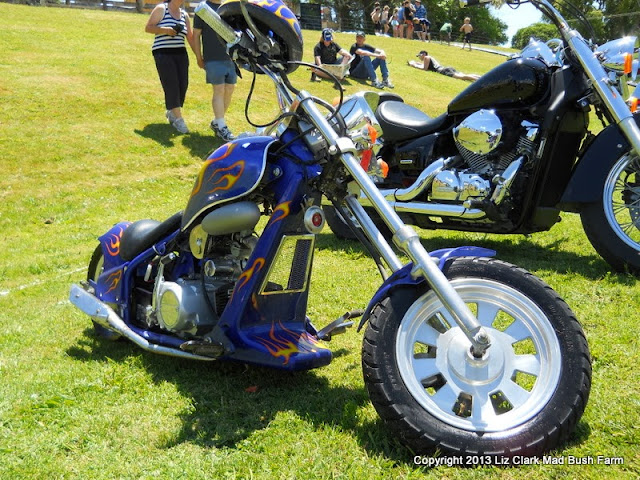 Then there was this amazing custom motocycle, with beautifully detailed custom worked flames all over it. I bet that can melt the tarmac with the big engine it had powering it. Yes I love motorbikes as well. 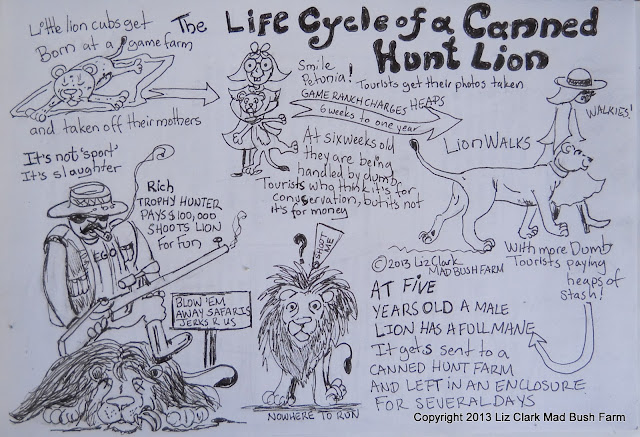 Then there was this cartoon. I drew it one night because I got mad! Trophy Hunter Melissa Bachman made headline news over her posting of a photo posing with an adult African lion she had shot. Hunting it wasn't. Bachman is but one of many overseas trophy hunters who pay up to $US135,000 for the privilege of shooting an african lion, in one of the many canned hunt farms spread through out South Africa. This type of hunting involves leaving an adult human-habituated lion in a large enclosed area. Often these animals are shot from a vehicle or at close range. Lion breeding farms make a fortune from these animals with cub petting, Lion walks and paying volunteers, who have no idea they are helping raise cubs to end up as mounted trophies in some wealthy big game hunter's trophy room. I had posted this on my facebook wall with the comment "I hate canned hunting.."A friend of mine involved with the zoo industry saw it, and shared it over onto his wall. Over 200 shares later the feelings of people were being expressed. Many had reacted with shock that this does occur. There's nothing funny about canned hunting. Lion Aid a charity based in the UK asked for my permission to post the cartoon up on their blog. Have a read what they have to say gives you a deeper insight into what is a cruel, pointless trade based only on profit taking which truly puts the 'con' into conservation. I cull possums because they are noxious pests, not because I paid some jerk outfit $135,000 to go and blow it away so I could get my photo taken with a dead animal. But on a more humorous note...

This ad is from 1995, for the Smokefree Rally of New Zealand. It features two animated possums having a fag and a chat in the middle of the road......"Check it out two moon" says one of the possums..........and the rest is Kiwi iconic history. It's hilarious at least to kiwis since possums are a serious pest here in this country. Not their fault some idiot decided to introduce them here. Well that's me for another post.