When Christmas Pork is a bad idea 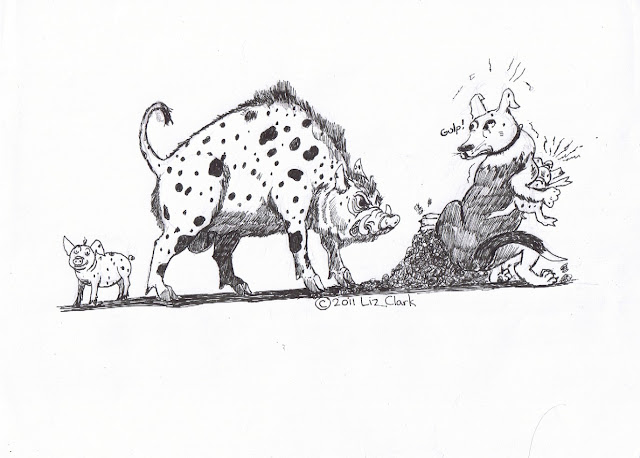 When I was a kid, where I lived was still all dairy farms and orchards. One summer, my parents headed off overseas for a few week,s leaving us six kids farmed out among our relatives and friends, while they went off to enjoy the sights of Australia for the very first time. It was back in the 1970's and I was just 8 years old. Everything was larger than life, and the man had walked on the moon at least twice.

In the second week my parents were away, I spent a week staying at an uncle's (he was actually a close friend of my Mum and Dad) farm out in Taupaki. Uncle Lex and Aunty Colleen had a commercial chicken farm, with a few sheds full of cackling hens, that put a raucous if anyone stuck their heads in the shed. I loved being on the farm. Plenty to do there, and lots to look at. They had a few dogs, and one of them a fox terrier named Spot was the bane of kids. She loved nipping my heels at every opportunity, so I learned rather quickly to avoid the old dog, and her favourite sleeping spot.

Way down in the bush, at the back of the farm, two old pigs were doing their best to wreck the fences, and whatever else they could root up. They were nasty old sows, both bush pigs, that had appeared a few weeks before, from out of the fern. The old pigs had already rooted up Aunty Colleen's garden, and had set their sites on the turnip crop being grown for the winter cattle feed. With Christmas coming up, Uncle Lex decided it was time for those old sows to end up as Christmas Pork.

With dogs and .303 rifle in hand, a couple of kids perched on the Massey Ferguson Tractor, off we all bounced down to where those two old pigs hangout was known to be. Shane the big huntaway led the charge into the paddock of braken fern, with only his tail visible for us to know where he was. Jet the pig dog followed behind hot in pursuit of his canine mate. And then, the squealing started. The tractor moved on through the ferns, the big wheels flattening the fronds, with us all watching out for signs of pig. Only the dogs tails could be seen, and the frantic fury of fern fronds being bashed to pulp by a couple of hundred kilos of mature porcine bulk. There she was, being bailed by the dogs, one big old spotted sow with one dog on her nose, and the other dog on her rear. Uncle Lex got down off the tractor, called off the dogs and shot the sow in the head. That was the end of her. Not a problem to lift her carcass up with the tractor hoist, and into the trailor behind. The dogs looked rather pleased with themselves, and so did Uncle Lex, until, there was an indignant squealing right from behind.


"Heaven has no rage like love to hatred turned / Nor hell a fury like a woman scorned."wrote the man of wit Willian Congreve in 1697 when he had composed The Mourning Bride. In this case it was "Hell came with fury with bristled up hair, a twitching tail and an angry sow's squealing scorn". She came like a freight train at full speed. I guess that day, Uncle Lex broke the world's sprint record for how fast can you run up the nearest tree. The dogs vanished like puffs of smoke, abandoning the boss to his fate sat up in a tree, with two kids perched on a tractor laughing their heads off at his difficulties.

Lucky he had the safety catch on his gun. While Furious below continued to squeal and slam headlong into the old totara tree Uncle Lex had manged to climb into, the two dogs decided to at last come back to render the boss their assistance and hold onto the pig. Finally there was the sound of gunshot and Furious dropped like a stone. She breathed her last and that was the end of the two old sows in the bush.