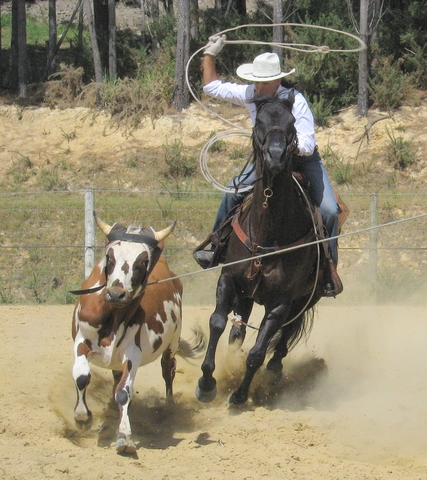 I must be on some kind of a nostalgia trip writing these crazy stories of mine. So here's another one to have a laugh about. And it was funny. So here we go another one of those mad stories from my insane youth.

When I was 17 years old and rather thick as two planks, like all young teenage girls who loved horses I ended up working with them at a trail riding place north of Auckland. They had a big rambling old house built sometime in the 1880's, with all kinds of old things lying around the 12 acre small holding that surrounded the grounds. I had my horse a crazed thoroughbred nutcase named Jago, and a small 14.1hh pony by the name of Andy.

Long years, have passed since those two have long since died. But the memories I had of them are still good and strong.  Having  that old farmer's instinct in me somehow, I wasn't scared to roll up my sleeves and help around the place with fencing and the chores that had to be done. We'd take people our for rides to Muriwai Beach on the west coast and gallop for miles. Crazy times sometimes brought in crazy happenings.

The owners of the place, one day, decided to get in these half wild steers from a sale. The things were big, ugly, and didn't know what a 7 wire fence was. They were unloaded in the rickety cattle yards before the entire herd was sent out into the 10 acre block at the back of the property - and we watched as they climbed the fence like a flight of stairs, and off into the next block over. And there, they stayed for a couple of months.

One day going down there, the boss discovered one of the crazy steers had gone off to the great herd in the sky. There it was ,with all four legs stuck skywards as stiff as cardboard. So, the vet was called in to do an autopsy, and find out what the steer had died from. Carking it on a Monday maybe was a good thing. It meant the vet was clear of weekend stuff, and now rolled up her arms to cut up a dead cow, and find out just what had caused it to curl its hooves up.

While everyone else ran for the hills, screaming things about not wanting to see a cows guts, the ghoul here (who had no qualms about looking at dead things in the paddock) happily assisted the vet in cutting up said deceased steer to find out what had bumped it off. Cause discovered in the liver, with some great long scientific name, that, for a 17 year old ,went in one ear and out the other. Not good to have in cattle, so the vet said so it was all cattle in the herd to be vaccinated as soon as possible..which is where we get to the fun part of this story.

Given the yards were so rickety from decades of neglect, the chances the hulking bovines would soon break out were high. And sure enough one smashed its way straight through and into the concrete cattle yard beyond. We were soon off the horses and thinking about ways wee could hold the beasts in the crush, while the boss gave them the jabs. Ropes, posts and whatever else could be mustered together were soon in use. Bad idea to rope a steer by one leg, in a muddy yard full of cow crap. It kind of leads to more interesting events, such as Heather holding on for dear life, said steer bellowing like a demented banshee and heading for the hills - literally. At full speed, headlong through the yard fence, the steer took Heather for a joy ride session face first into the great pile of fresh cow dung. It makes an interesting look having green sloppy cow crap dripping from your face, and having the hair colouring to match. Not to mention even the clothing ends up matching with a touch here and there of mud to compliment the ensemble. The score card then read Human 0 Steer 10.

Meantime the boss and I were hard at work getting the rest of the steers vaccinated when one took exception to being jabbed in the butt. I got it both barrels in the guts and went for an interesting flight without the need for a ticket. With Heather already looking very fashionable in her new environmentally friendly 'green look' laughing her head off. By now my free flight was over...straight into yet another big juicy fresh pile of cow crap and churned up my. Naturally it was the facial treatment, joined by hair follicle enrichment eau de processed grass, and the matching ensemble outfit to match that of my friend's. The boss well....let's just say the raucous laughter disturbed the birds in the trees.

It took three showers to get out the stench and the colour green.