Import one pork disease, get the second one free? 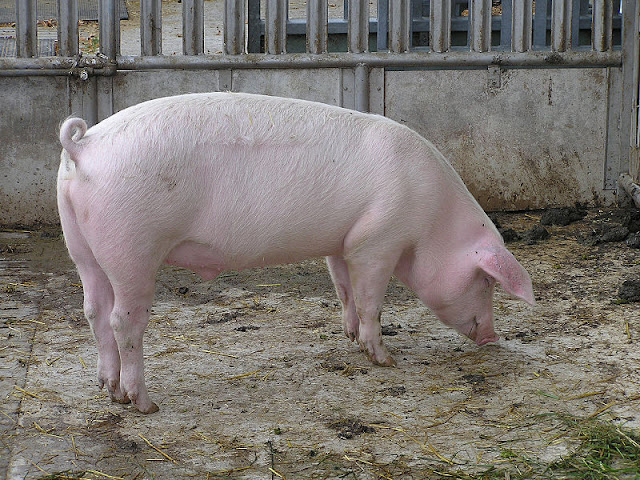 Image Sourced Wikipedia Commons
Proposals by the Ministry of Agricultural and Fisheries (MAF) to relax import health standards for raw pork from the United States, Canada, Mexico and the European Union (EU), is like playing Russian roulette with the entire agricultural sector.

"Although MAF have stated that there is only a 1 in 1227 year risk of an outbreak of the Porcine Reproductive and Respiratory Syndrome (PRRS) from imported raw pork, this doesn't account for other serious animal diseases carried in raw meat," says John Hartnell, Federated
Farmers biosecurity spokesperson.

"Take Bulgaria, which is a member of the EU.  Bulgaria has been struggling to put down an outbreak of foot and mouth disease, which has infected pigs and other livestock and fresh outbreaks were
confirmed only last week."

"The potential for not just PRRS but other diseases to be carried in raw pork is real.  Pigs are one of the greatest risk vectors for ruminant diseases and we don't want to import one disease and get a
second one for free."

"I'm sure MAF believes its calculations, but a disease doesn't stop to check the calendar to see what year it is. '1 in a 1227 years' could well be next year?"

"After all, the odds of a standard ticket winning last weekend's $34 million Powerball were 1 in 3.8 million but that didn't stop two people from doing just that.  MAF's odds seem more numerology than science - a belief in the numbers and not what a trend maybe telling us."

"This is not a case of protectionism. We live for free trade but that does not mean unquestioning trade."

"What we're talking about is retail ready raw pork that can be delivered from the export carton straight to a supermarket's shelf or to any food service outlet in the country.  There is potential for raw meat to host exotic diseases."

"The move to relax import health standards for raw pork is the thin edge of the biosecurity wedge.  Especially when agreement has just been finalised, which will see New Zealand pork producers adopt
world-leading animal welfare standards."

"This considerable investment will now be overshadowed by the increased risk that this industry now faces."

"As an island, we're still thankfully free of most exotic pests and diseases due to sound biosecurity.  It's time to put aside the calculator, open up our eyes and start matching activity with old fashioned common sense," Mr Hartnell concluded.