Greetings at the Farm Gate - May I EAT your camera please Hi Mr Postman can I eat your hair please?
'Normal' people raise cattle to eat them - that's 'normal people' note. Normal around here means, weeds that look like triffids, resisting all attempts of assassination by herbicide, to see them wither off into the great blue yonder, mice that seem to know how to spring traps without being caught, and of course, we have the one thing that truly makes our lives absolutely crazy beyond reason. The Terrorist and her continuing  %%##!!!! exploits around the triffid infested farm. The triffids will eventually  cark it! succumb to my herbicide when hell freezes over but meantime, I have to put up with them, the mice trying to use our house as winter headquarters for Mafia Mice Inc, and the Terrorist being used as the lawn mower grass reducing device. 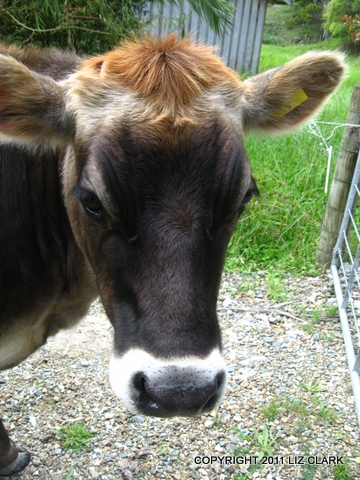 The Postman is ignoring me so I'll just investigate you Mum
The Autumn chill came on last night, with all of us starting to scramble around for extra jumpers, socks and thick blankets to hibernate under for the night. Caught between a dose of Criminal Minds and Inaya's quotations from the said series - I was wondering where sanity had gone to. A mad house is what we have. At this rate the men with the white coats will be turning up with the strait jackets and hopefully a cappucino to go. 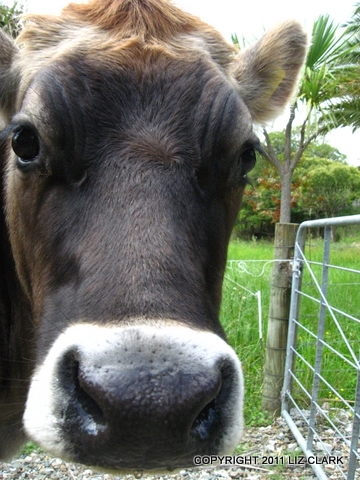 On the subject of cattle - I came across a story in an old newspaper was browsing when I was searching for something completely unrelated. I love our National Library for digitising our past newspapers and opening up an entirely new world into the past. We hear time and time again the saying 'Like a bull in a china shop' - how about a bull literally in a shop window. I am not kidding. I had to read it twice before I thought - oh blow it I'll print it off and blog about it. Too funny to ignore. It wouldn't have been for the poor bloke who owned the shop though!  In December of 1919 a gentleman had been to the market and bought a bull and a number of cows. As he herded them through the streets, one cow in typical fashion, decided to head off into another direction, with of course, the owner in pursuit. Meantime the bull decided to go shopping...

The Bull started a tour of exploration. He ambled slowly on to the pavement, and, apparently at peace with the world, wandered along. Suddenly, he perceived another bull glaring at him from the window of a confectionery shop. He bristled. The other bull bristled. He pawed. The other bull pawed. He roared. The noise he made effectively drowned the challenging bellow of the other bull, but the latter went through all the motions.
Our bull could stand it no longer. He lowered his head and shot forward in a charge. There was a mad crash. Women screamed, men shouted - and a completely bewildered and disillusioned bull was extricated from the wreckage of the window, and the big mirror which had graced it. His majesty seemed to think it was a really great victory, but with something unsatisfying about it.


His majesty's owner had to pay the owner of the confectionery shop £20. 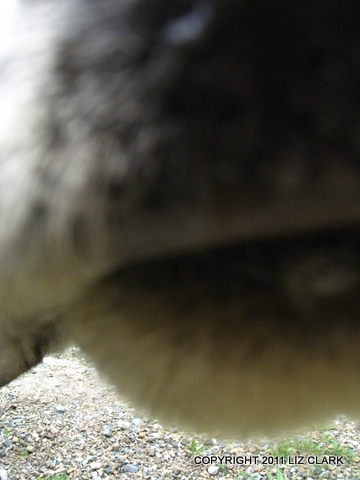 "I'm ready for my closeup now Mr De Mille"
Meantime I'll try and wipe the Terrorist's slime off my digital camera, and contemplate once more, the bug Zen of my this time - unburnt coffee. She had her  15 4 minutes of fame not to mention a piece of my clothing. Trust Andy Warhol to come up with that line. 11 minutes of yelling at the Terrorist to stop eating my camera! fame remaining on the clock....and counting. 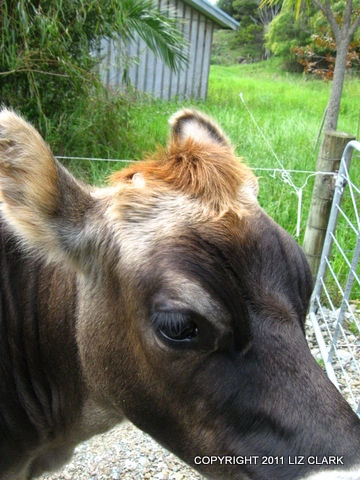 Oh please who is she kidding then? Have a good one folks