A load of old rubbish - but they call it art anyway 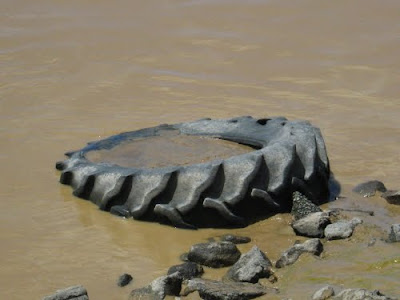 Is this Art? Some would say that the abandonment of man-made design reclaimed by nature is art. I saw this as perhaps something artistic when I photographed it. What is it really? An old tractor tyre thrown into the Northern Wairoa River as blunt as that. Yet it had form, design and function. And yes it's someones' old rubbish. Is this image art? No it's rubbish.
Normally I don't ever criticise an established artist's work. Nor do I criticise the reasoning behind a well respected curator of contemporary art's choice of a Contemporary Art National Award winner. I don't have a degree in Art or in Art history- but I have artist ability and understanding. I studied Art History during my high school years and learned to appreciate all forms of art. I love all art and believe I have a very open mind. I can look at something that may seem revolting, perhaps abhorrent to most people, and see the story behind sometimes very disturbing images.

What is Art? How do we perceive it? According to Shelley Esaak "Art is form and content"
She explains further that all art must consist of these two things then elaborates first on form as being

" 1) the elements of art, (2) the principles of design and (3) the actual, physical materials that the artist has used. Form, in this context, is concrete and fairly easily described - no matter which piece of art is under scrutiny." 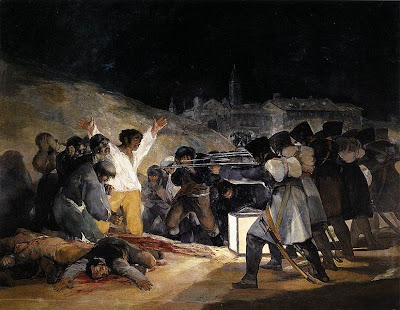 "Suppose you've written: "One half of all art is form. Here is how Goya's The Shootings of May Third, 1808 fits in." You would then go on to provide details about how Goya used color, value, space and line (elements of art). He used balance, contrast, emphasis and proportion (principles of design). He composed the aforementioned elements and principles on canvas, using brushes and oil paints (the physical part of "form")."

"Content" is idea-based and means (1) what the artist meant to portray, (2) what the artist actually did portray and (3) how we react, as individuals, to both the intended and actual messages. Additionally, "content" includes ways in which a work was influenced - by religion, or politics, or society in general, or even the artist's use of hallucinogenic substances - at the time it was created. All of these factors, together, make up the "content" side of art." - Shelley Esaak

Art comes in all forms we know that. Sculpture, painting, drawings, photography,digital media and the list goes on. In New Zealand we have a thriving art community. We've had some great artists in our own short history. Our contemporary artists have made international recognition. Colin McCahon was one of those artists. There are many many more I could name that would certainly have deserved this years Trust Waikato NZ National Contemporary Art Award than what was the recipient of the 2009 honours.

And the recipient? Titled "Collateral" by Dane Mitchell this work was literally a pile of old rubbish. 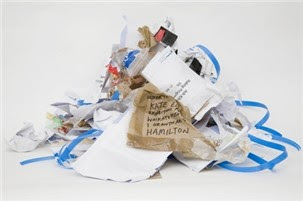 "Much of Dane Mitchell’s practice focuses on the mapping of the spaces of the art world and relations within it. By turns geographical, socio-political, archaeological and anthropological, he seeks to uncover and elucidate the ideological forces, the conventions, modes of behaviour, the networks, the pathologies and obsessions, the environments and structures, that construct the architecture of culture"- Louise Garrett 2005

The judge for 2009 was Charlotte Huddleston the current Curator of Contemporary Art at Te Papa Tongarewa the Museum of New Zealand. Huddleston according to the Waikato Museum is a well-known curator and essayist. Her significant curatorial projects have included Mostly Harmless: a performance series and Linked: connectivity and exchange both presented at the Govett-Brewster Art Gallery. She has written essays on Ann Shelton, Saskia Leek, Hye Rim Lee and Lee Bul and contributed to several other publications including Art at Te Papa.

The entries into the awards were an eclectic mix of photography, digital art, sculpture and painting.; The time and effort taken by the finalists can be seen in the images of their well thought-out and perhaps evocative works. As for the winner - according to the Waikato Times Berlin based Dane Mitchell wasn't even there nor did he create the actual piece.

"Mitchell wrote a message to Waikato Museum art gallery staff asking them to collect the discarded wrapping of other entries and tip it on the floor. That was his entry, the Waikato Times reported."

Artist and fellow entrant Mark Hayes, said he spent 26 hours "cutting, welding and grinding"' for his Domestic Violence is Not Okay sculpture, but probably should not have bothered. "Contemporary art needs to say something to you and make you think. I am sorry but I just cannot see the 'clever' and 'cheeky' in the winning sculpture," he said. "Is someone trying to make Trust Waikato look like a joke?" Other local artists Collette Fergus and Bruce McLachlan said the winning entry was "the worst yet". "A pile of rubbish that wasn't even created by this guy is worth $15,000?" Fergus asked.
She said it was a "sad mockery of us all and an embarrassment to the arts community".

To be honest I agree with the losers. Now I am going to criticise the judges choice on the following grounds. Firstly the artist did not create the piece - forthwith it is not original even though they may have emailed an idea to some staff members at the Museum and got them to collect other peoples detrititus. Secondly what has a pile of old rubbish got to do with anything at all??? I can easily go and tip over a rubbish bin onto a white platform in a gallery then call it "Ode to the woes of human indulgence" then go into the deep long winded meaningful explainations such as archeology of the manufactured society, biological recession into the inner soul and get away with it. Would that be art? On this old pile of rubbish named "Collateral " It is a shameful travesty for New Zealand Contemporary Art. Poorly chosen, poorly conceived, unoriginal and it has to be the worst and most embarrassing so called Sculpture in New Zealand art history. It sucks. I think the award should be rethought and rejudged and 'Collateral' thrown into the tip where it belongs. Contemporary New Zealand Art - it isn't. Trash - yes it is. Throw it out and throw out the judge with it. And shame on the artist for claiming the prize at all when truly, they did not deserve it.