And out they go! 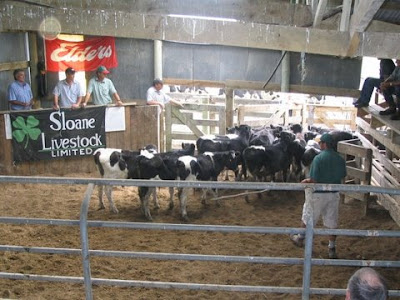 There comes a time when bulls need to be sent on. Our Hereford bull Micah had reached almost four years old when the decision had to be made to send him off to the local cattle sale. Being a commercial bull Micah had spent most of his life being used to tail off on dairy herds as well as siring a few good calves from our cattle. But he was getting too big and heavy to be used over dairy heifers anymore. A quick phone call to our local stock agent Allen had Micah being picked up the following week and taken on the truck to the local Matakohe sale yards one Friday morning much to my kids sadness. Micah was quiet and easy to handle but always caution prevailed. He wasn't a small bull either. 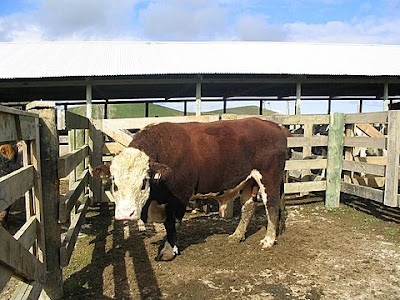 The kids and I decided we might as well head off to see what was happening at the sale that morning so it was off in the 4WD to Matakohe. They're a good bunch down there. The locals had turned up to take a look at the lines of cattle on offer while some of the Farmer's wives were there serving tea, coffee and offering freshly made sandwiches and filled rolls. The talk was about the pasture growth, the lack of rain and the general condition of the dairy cattle now most had reduced to once a day milking. A quick pep talk by me to my kids about why they don't wave their hands around or scratch their nose was forthcoming before we found a place to sit and watch the cattle go through the sales ring. Why? I was asked by my youngest who had a deep thoughtful frown on her face." Well it's like this" I explained, moving aside for a farmer wearing steel capped boots with a serious knowing glint in his eye. "You scratch your nose or wave your hands around you might end up buying a lot of cows you can't pay for." Behind me was that farmer with the steel capped boots having a chuckle. My youngest gave him a hard stare asking "Did you do that man?" The farmer (his name was Ray) had nodded saying "Yes I did that once and ended up buying a lot of skinny wild cows with big horns and mean attitudes. So if I were you I wouldn't scratch your nose." He was kidding of course. Youngest one took that in thoughtfully, considering Ray the Farmer's wise words for a few moments, then pointed to the two toast-rack like cows that had just entered the sales ring, with calves bigger than they were e "Those cows are skinny, so they're no good - but their calves will taste nice. So you can buy them okay?" Ray smiled about that one and yes he did buy them. The cows went for $200 a head and their huge 8 month old calves went at $450 a head. Where did they come from? Hate to say it a Lifestyle block where in that particular case the owners didn't know what they were doing. On thing I won't allow is for my cows that are feeding calves to lose condition. If they do even with extra feed -and the calves are old enough I wean the calf and dry the cow off.

Then, it was Micah's turn to go through after a few lines of dairy heifers and steers. Ray was now beside us asking me a few questions about that big monster of a Hereford who didn't seem to mind being moved around the sale ring. Alan the auctioneer was all out calling Micah a lamb as far as his temperament went. I filled Ray in on the bulls' background - next thing I know Ray had got the top bid. Micah had found himself a new home. He sold at $1250 plus tax, which wasn't bad considering he was borderline as far as a breeding bull went. As far as I know Ray the Farmer still has the big boy and of course, I have his rather short son Minnie Micah, who, like his Dad before is doing his job well. 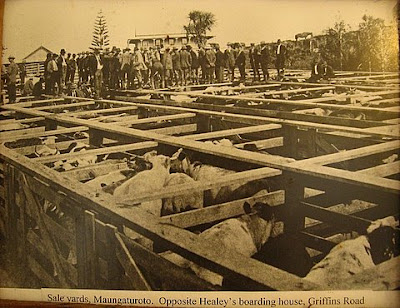