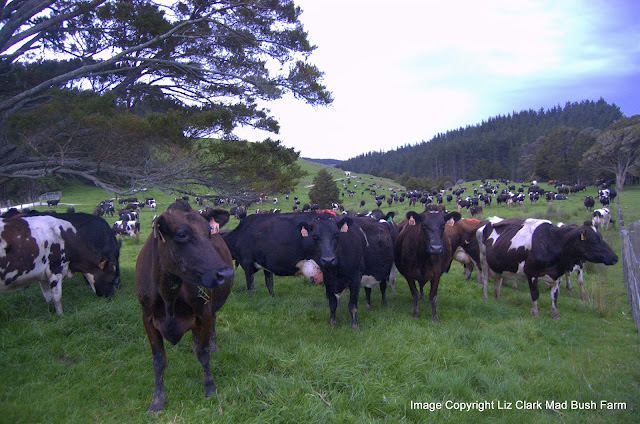 Back last year Fonterra had announced one of the lowest payouts ever to New Zealand dairy farmers from record highs for the previous seasons down to a mere $3.85 due to a massive fall in global diary prices. To add to the pressure already placed on farmers in the industry animal activist group Save Animals from Exploitation produced a video showing disturbing footage of bobby calves being callously thrown into the back of a stock truck along with the brutal inhumane bashing on the head of calves at an unidentified slaughter plant in the Waikato. The footage had been taken from hidden cameras placed by another activist group affiliated with SAFE (NZ) Farmwatch. Farmwatch investigator John Darroch was the person behind the investigation undertaken by the organisation across 14 farms and the slaughter plant in the Waikato. With the release of the footage the New Zealand Herald (November 30,2015) headliner read

Fonterra, DairyNZ and Federated Farmers were swift to deplore the appalling footage as were farmers and the public.

This video produced by SAFE (NZ) has been posted on YouTube footage from it also aired on current affairs programme Sunday on November 29, 2015. If you watch this footage, along with the sinister sounding music it seems so compelling. The title "NZ Dairy Cruelty exposed" gives the impression this is normal in dairy farming. The disturbing footage especially at the slaughter plant is heartbreaking to watch but is it really where all bobby calves go to be turned into veal. Is it normal for truck drivers to throw calves into trucks or for a slaughterman to bludgeon calves to death. The manner in which this has been portrayed it appeared to be that way. However when getting to the bottom of it all things don't stack up especially the worst footage involving the inhumane slaughter of the calves.

For starters looking carefully it didn't appear to be at any plant associated with the main processors AFFCO or Silver Fern Farms. In fact it turned out to be a small Waikato based Petfood processor who confirmed they had dismissed the worker concerned. The men caught on the video throwing the calves into the stock truck were later dismissed by the company owner. SAFE (NZ) are by no means new to causing controversy. In 2009 former comedian Mike King and now spokesperson for Mental Health issues had featured in a video produced by SAFE (NZ) to highlight the issues regarding the use of sow crates in the pork farming industry. The former spokesman for NZ Pork was taken to an unnamed commercial piggery under cover of darkness by SAFE (NZ) affiliated activists. He said himself he had been appalled at the conditions the sows were kept in. However in an article in the New Zealand Farmer King had said he had been never been affiliated to SAFE (NZ) and was appalled by its actions over the bobby calf issue. He had written an email to Hans Kriek director of SAFE (NZ)

"Your portrayal of NZ farmers as 'animal terrorists' on the international (scene) are not only false, they are irresponsible in the extreme. The actions of a few is not a reflection of an entire industry, Hans, and one must question what your real motive is. Is it really about animal welfare? Or is it about destroying farmers and the NZ farming industry?"

A few days ago another headliner appeared 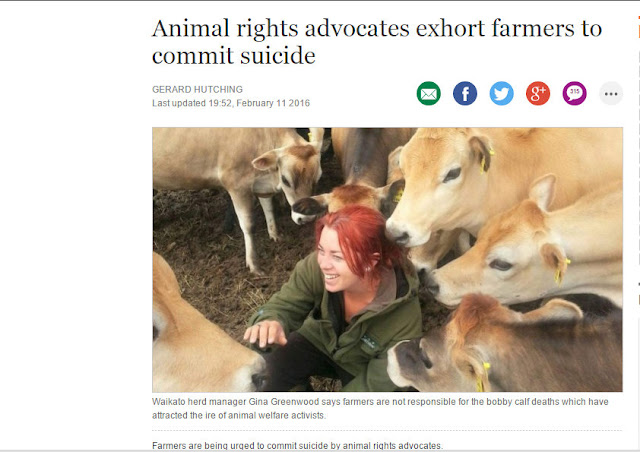 Two women dairy farmers ,Waikato based herd manager Gina Greenwood and Jennifer Halligan told the media that animal activists on social media in some posts were telling farmers to commit suicide. A further example of one of the posts which had been given to the media stated:

"I completely agree that farmers are mentally ill. You have to to be to treat animals in such a brutal fashion. Unfortunately a lot of farm workers have the brain size of a pea, and no compassion at all. These helpless vunerable little calves should not be subjected to such viciousness. Their lives already suck. Being surround by these demented uneducated monsters must be terrifying. I don't see farmer suicides as a problem, I see it as justice for these more helpless creatures"

SAFE (NZ) stated they did not support such actions taken by the persons concerned. However, SAFE (NZ) are responsible for this happening in the first place. Their silence by not posting an advisement to their supporters on their social media to refrain from such appalling actions. They should do and can do. So why haven't they? I'll leave SAFE (NZ) to perhaps answer that question.
Email Post