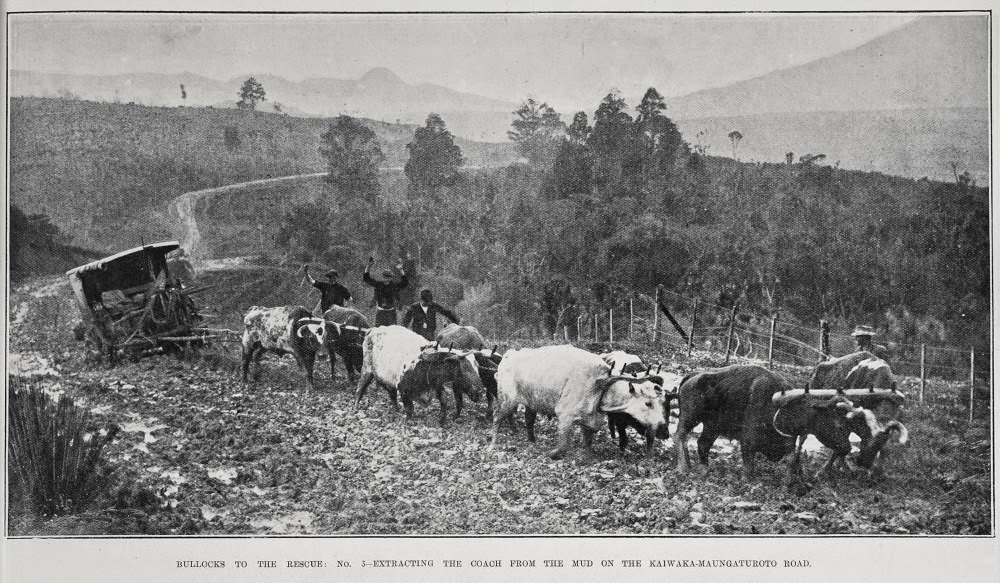 Sir George Grey Special Collections, Auckland Libraries, AWNS-19121024-3-1 24 October 1912
BULLOCKS TO THE RESCUE: NO. 3 EXTRACTING THE COACH FROM THE MUD ON THE KAIWAKA-MAUNGATUROTO ROAD

Yep me again moaning about the darned crappy weather we've been having. I think Mr Storm and his mates have been having a field day up my way for the last couple of weeks. Thanks to Mr Storm and company the main highway North has been brought to a stand still. I drove on it this morning south to Kaiwaka to drop off my brother-in-law's friend so he could take a bus back to Auckland. Usually he can catch it not so far away, but, because of the landslips and collapsing roads that option became a few more miles down the road to the next township. The road already is full of deep potholes which I had to avoid both ways. Northland's roads are crap and always have been. Anyone wanting to travel north this week will have to take the long way around through the rough as guts back roads (which I know all too well) to get to Whangarei. Craig Cooper the editor of the Northern Advocate in his editorial last Friday had this to say about Northland's roads:

"For a long time, I have wondered about the quality of Northland roads. It is a lay person's observation, as a motorist, but I think our roads are of a poorer quality than elsewhere in the North Island.

Drive south, and it is hard to not be impressed by the quality of the road surface, and its appearance.

The latter, I think, has more impact than people realise. It gives you a sense of the region.
Consider this - you're looking at buying a house, do you feel more positive about a home in a residential street with an asphalt-lined professionally curated driveway, or the one with a rough, metal driveway?

Sure, metal driveways have their appeal and charm, but you get the picture?
What does that driveway tell you about the home owner?

Much, I believe. I am a lay person, so I don't know what the answer is. But I think Northlanders have a right to ask some damn hard questions about why our roads aren't as flash as our southern cousins, putting aside the fact the hammering they get from the elements."

- Craig Cooper Editor Northern Advocate
Editorial "Why are our roads so bad?"
18 July 2014

Without a good roading network a regional economy can grind to a standstill. We've had the notion as well by our present government to either mothball or close down the Northland railway network. Which in the long term would be a very poor financial decision. Sooner or later, we are going to have to stop relying solely on road transport as the only option. I have to wonder when eventually the powers that be are going to wake up and realise that reliance on fossil fuels and roading network with a history of problems in adverse weather isn't going to solve a damned thing. Northland has always been on the bottom of the heap when it comes to government funding and still is. Take a look at the graphic below from The Transport Blog

While further south motorists enjoy well constructed roads we get potholes and collapsing roads, the graphic above speaks for itself. Spending on state highways increased then peaked in the 2008/09 period, decreasing with one small increase in 2010/11 before declining in the following subsequent years. The government recently added yet another excise tax onto the cost of petrol. A tax on the tax so far has only seen everything else rise along with that increase. Northland's entire regional economy is almost solely dependent on a reliable roading network. We do have a port at Whangarei and an airport as well as a decaying rail network. It's election year this year, and suddenly the MP for Northland Mike Sabin is promising to get the two one way bridges on State Highway 12 sorted out. Admittedly Mr Sabin has been gathering data on the two dangerous crossings which have hampered Kaipara District's economy due to transport hassles. Even so those bridges should have been replaced over 20 years ago, but instead we have to put up with them and the tourists who don't know what a give way sign is for. Enough bleating about our roads. That's life I guess.