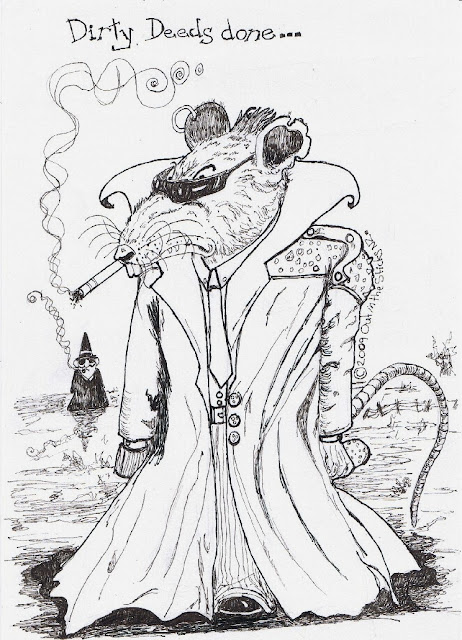 This morning my poor mum rang me in a terrible state. The panic in her voice was all too real. The problem? One rat sat on her bench making itself comfortable, oblivious to the drama going on just beyond, by the human occupant making a frantic call on the telephone.Call for help made to second to youngest child in her brood of six children, to come up and deal with said Mr Rat.

I went straight up there to sort the thing out. Yes there it was, as large as life cleaning its whiskers, unafraid that doom was now overshadowing its very existence. (cue evil laughter)

Fortunately, it wasn't one of those horrible ugly water rats that show up from time to time. It was a native bush rat or Kiore. Even so, it was not welcome in my mother's home. A few shoves, and it headed out the door. I chucked some rat bait under the deck and that should have been that.

No, it wasn't. Two hours on.......the phone rings again. Again, my mum is in a blind panic. She is terrified of rats, no matter what size or species they may be. In her view, rats were rats and they frightened the living daylights out of her. Yes, the rat had gone back inside her house, and she had gone outside! No way was she about to go back in with a rat running around inside her family room.

After an initial chase around the room with rat running like heck and homocidal Mad Bush Farmer with broom in pursuit rat dived under the fridge. Only one solution to deal with said noxious rodent. TRAPS!!!.

I went down the road, bought a couple good quality rat traps and then baited them with chocolate and hazelnut spread. Mice and rats can't resist the stuff (neither can people for that matter). Traps set around the edge of the family room and kitchen. Mum came back inside feeling a lot happier, now that doom was awaiting said rat. I figured one way or the other by morning, I'd get a call saying rat had been caught.

Two hours after the traps had been set, one relieved mother rings the Mad Bush Farmer to tell her that rat had met its end in the trap set in the kitchen. I went back up, got rid of the deceased Mr Bush Rat and spend the next hour just enjoying my mum's company with a coffee, and an evil Mad Bush Farmer's grin.