We'll start with Murphy's Law shall we? 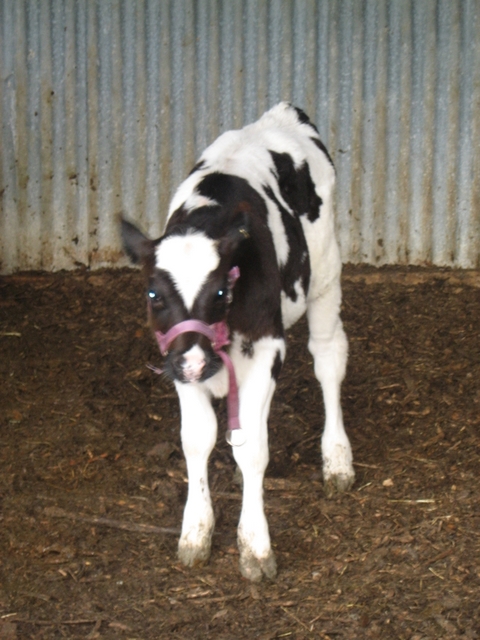 Murphy's Law definition: Murphy's law is an adage or epigram that is typically stated as: "Anything that can go wrong, will go wrong".

It started something like this. Go out for the day with mother, have a nice cappuccino and a chicken, brie and cranberry quiche down at a lovely cafe in Snell's Beach shopping center. Early afternoon head back over the course of an hour knowing little, very little about what was occurring back at the Mad Bush Farm. Chaos.

What we didn't know was that way down the back of the farm the Horned Horror (not our darned cow) which I've had to carry for some time, and that our neighbour was supposed to collect some time back had broken through a fence, demolishing it totally, to slip into our neighbours, along with River and the Terrorist. Being cows, and being what they are the first thing they did was head for the orchard, the well tended gardens and start on a spree of wantan destruction. Neighbour hacked off (I don't blame him!) rings, no-one is home of course, leaves annoyed sounding message on answer phone and goes to work. His wife is left on vigil after cows were chased out of their formerly, once beautiful garden, now turned into a version of a battle site.

Meantime at 2pm, we get home, unaware of the drama unfolding next door. Sit down, have a coffee, think about going to start doing something around the farm, now the girls morning out is over,and an hour later the phone rings. The story is told. An unhappy story about the Jersey Cow Mafia moving in on the turf. Bah! I said lighting a smoke (even though I had vowed I would cut down to zero proportions). Apologised profusely to my long suffering (and very decent) neighbour then thought how the heck am I going to get them out of there! I had one teenage helper on deck, but I needed the other who wasn't going to be back until 4pm. Oh heck darn, blast, and oh my aching back. Yes that hadn't helped being bent for almost three weeks. With only just straightening up properly, now the Jersey Mafia had ruined my day. And ten minutes later, the phone rings, again.

This time it's my mother. She tells me that the horses are all over her lawn. *sigh* The darned electric fence as usual decided it was going to have a short and not work . Wonderful..NOT!. Choice to make. Get horses or go and get cows. Well the cows had be got back, it was getting late and being winter, dark comes at 5.30pm. So it was go get middle daughter from her return of having a nice time at the hot pools in Parakai. Get some insulators at RD1 store and sort out portable electric fence, standards, electric tape, a bucket of feed (to con the Jersey Mafia Leader with), gumboots, brains and the car. Loaded up, drove up the road, with kids, junk and foul temper by then to stop by the boundary fence.

Unload car, kids, foul temper, junk and somehow lurch one's way over the fence, to end knee deep in a muddy bog that used to be pasture once ..somewhere long ago as I recall. Inaya and Michelle get over helping to lump all the junk required to retrieve, then contain said jersey mafia fugiitives from again engaging in less than acceptable activities namely destruction of neighbour's property. After a big debate, over 'where' said cows were getting out.  It was decided to trudge through the bush, aka native bog hole and check down the back corner. Oh gee guess what awaited one utterly destroyed fence *mutters*.

Inaya goes after the cows, Michelle is doing heck knows what, while Mum is trying to sort out the mangled mess so we can get said bovine fugitives back home. It took a lot of yelling, swearing and Inaya's temper fraying to get the cows moving. In the end I had to go up there, because the only one head mafia cow follows is me. So we got them back. Sorted out the fence and by then it was pitch black.

There we are stuck down the back of the farm, no torch, grumpy, tired and all three of us hacked off with the entire situation. I wired up the fence, didn't move quick enough and got walloped in the eye with a fence batten. Well the words I used were in the *censored* category. It hurt! I got a cut and nice bruise to show for it. Anyway um where were we? Oh yes stuck in the bush in the dark and all we wanted to do is get back to the car, go home and have dinner.

I hate being frustrated, tired and having a sore eye with a whopping headache stuck in the dark in a boghole of a darkened, scary lot of trees. Lucky for me Inayay in her calm, cool collected logic guided all three of us through holes filled with mud, tree branches,muddy streams, more bog holes and finally at last the saga was over. There you go. Murphy, and his law are now on notice. I see Murphy and his laws near my place anytime soon, I'll be out with a shotgun, the buckshot and a lot of censored words.

Yes we had to laugh because it's so insane it's just too funny not to laugh about. So there you go, let Murphy know I'm looking for him....