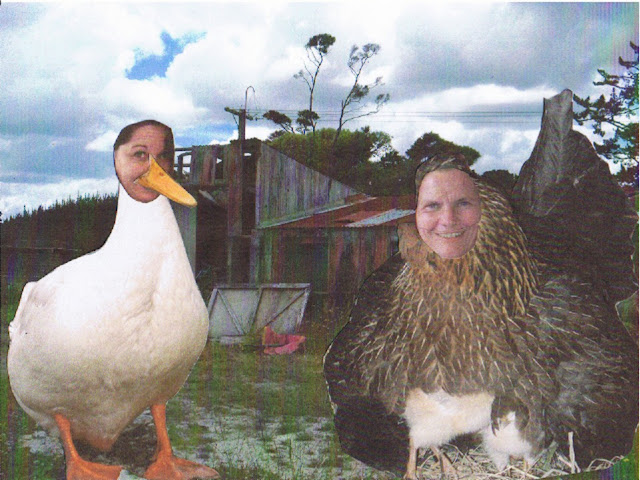 This photo is a complete yarn too!

Many years ago Grandma and Grandpa had a big old farm house, complete with drafty corners and big wooden verandahs that went right around. Beyond was the garden full of fruit trees and rose bushes all lovingly pruned with every colour a rose bloom could ever be found in. Grandma was very proud of her house and her garden. She had won lots of prizes at the local agricultural show every year with her prized roses, and her wonderful baking. She also had a big old jersey house cow named Lucille that gave fresh milk each day so Grandma could make her bread and have fresh cream for the scones she would bake in the morning.

Being very house proud, Grandma, of course, had a broom. It wasn't just any broom, that Grandma had handy beside the farm kitchen door. It was a special willow broom made by grandpa's own steady hands, just for Grandma to use. Woe betide anyone else who touched Grandma's special broom not even Grandpa risked touching that broom or he knew he would get a good ear bashing. And there, it would sit beside that farm kitchen door seemingly unused, and yet the floors were always swept clean. Which is where, we get to the story about Grandma's willow broom. As kids, we were never allowed to touch that sacred broom. No matter how much we asked and pleaded to use that big old broom it was always the same. "Don't you dare touch my special broom!" Grandma would call from the laundry if she knew her grand kids were figuring on laying just one finger on that well cared for willow broom. Never ever touch Grandma's broom. She never did say why, the rule was clear enough or it would be a good spanking instead. Grandma didn't ever kid around - rules were rules she always said and that was that.

One fine day as Grandma was in the kitchen, a big jersey bull jumped over the post and rail fence straight into her prized rose garden. Oh dear!!!! Those roses were her pride and joy, but as all jersey bulls can and do those roses were soon being turned into mashed up compost. He tore, he ripped, he stomped and he snorted those roses into the ground. And, just for good measure, that big old bull gave a few more a good belting with his big heavy head. He was almost done with the roses when Grandma saw him through the kitchen window. Her bellow could be heard clear to the next town. "OUT OF THERE!!!" she shouted running towards the kitchen door. On the way out Grandma armed herself with her special broom, never mind she still had her dressing gown and slippers on. After that bull she went.

Meanwhile that big jersey bull was just about to start on a lovely big red rose. Out came his big long sandpaper tongue to curl around that delicate bloom when ....he felt a good hard wallop on his read end. Now it was the bull that bellowed with all of his might!!! Off he went bellowing with grandma and her broom in hot pursuit! Wallop! Thump whack thud bash crash. All the sound effects one could ever ask for were heard that early morning. It was around and around the fish pond, through the fish pond and that broom going thwack! thwack on the bull's big ginger rump. Through the fence went the bull, and so did Grandma, who gave that darned bull two extra hard wallops, just as a reminder to never mess with Grandma and her broom. With the bull left with a smarting backside back in his paddock, a triumphant, but somewhat exhausted Grandma returned back to her kitchen with her special broom. It wasn't the first time that bull had come, and it wouldn't be the last time either. At last the truth just why that broom was really there came out one day. It wasn't to sweep the dust off the floor, it was to sweep the bull out of the garden. And that is the end of the tale of Grandma's willow broom.

And the real story this yarn was based on?

About three years ago, my poor mother was awoken rudely to one of our cows in her garden. It was 6 am in the morning, she was in her dressing gown and slippers at the time. Well out she went with a nylon broom and chased that darned cow around and around the fish pond. In then end the cow went into the fishpond and stood there for a bit before finally she went back out into the paddock. I'd say it was one heck of a hilarious sight indeed.