The Mysterious Mr Black: A farm story (bit of a true story bit of a yarn) 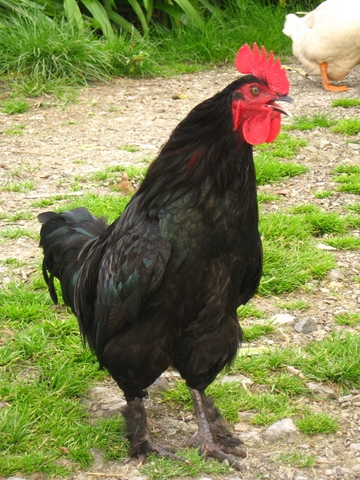 When you're just a kid of five or six years old, things are always larger than life. It took bravery to venture into the old chicken houses on the farm next door. They made for a ramshackle collection of buildings, slightly on a lean, with rusted corrugated iron,  the timbers full of dry rot. Inside the groaning slowly collapsing sheds, were the old nesting boxes, some with eggs still in place, the hens that had laid them long since vanished. I vaguely recall the flocks of White Leghorn hens out in the paddocks foraging away for their feed of grubs and insects between the blades of long rich dairy grass, where once cows had grazed. They had long since gone as well and the walk through milking shed had been abandoned to the elements.

"Beware of Mr Black" the old farmer who owned the place, would warn, whenever someone suggested going over to those old chicken sheds to do some exploring. Usually, his warning worked. It kept the local kids away from those forbidden sheds, and off his disused farm. But, then, there were those kids who loved to try breaking the rules, and go venturing into the darkened interiors of those old sheds anyway.

An older brother and sisters in the household meant adventures afar - even if it was just an old farm next door, with scary old sheds, and the mythical legend of Mr Black. Some of the local kids reckoned Mr Black was a Bogeyman that the old farmer had living in inside one of the sheds. One kid claimed he had seen Mr Black. He said Mr Black was HUGE with big teeth and loved to eat little kids. Of course, being young  enough to believe anything at the tender age of five of six - it just had to be true. And, there, it would have remained, the legend of the mysterious Mr Black the bogeyman, who lived in the shed waiting for little kids in the darkness. But for the want of adventurous kids that liked poking around, the mysterious Mr Black was soon to be revealed.

The older brother announced one day, that it was high time he and his sisters, went over and found out just where the mysterious Mr Black might be hiding. If indeed Mr Black really did exist at all, he was bound to be in that very dark old shed. The one with the crooked door hanging forlornly by the hinges, was where the kid down the road, had said he had seen the terrible sight of the bogeyman. The older brother, though, of the kid who believed everything she was told, didn't quite take that story as truth. One morning he armed himself with a big old stick, talked the big sisters into climbing over the farm fence, and off to at last find out just where Mr Black was hiding. The old farmer next door had gone out, so it was now or never. Over the fence they climbed, whilst telling the littlest sister she couldn't come, because Mr Black ate little girls!. As the littlest kid looked, on the bigger kids led by older brother with the big stick at the ready went on over the forbidden farm fence, to head for that dreaded place where the bogeyman lived.

Now they had at last reached that shed. Brave, older brother of the little kid who believed anything she was told, edged up to the door. The old shed door, on the rusted hinges, slowly creaked open......inside went older brother, big stick at the ready, followed behind by the big sisters as back up - just in case. It was very dark in there. Something moved........something cackled.....hearts started beating faster...and faster....could it be? Could it truly be...Mr..Black? Older brother edged closer to the shadowy shape he could see in the dust ridden gloom. Nearer. Nearer. The tension was building. The stick was now at the ready. He swung at the shadowy thing that cackled and squawked then  flew at him with righteous rage. It was far to much to remain there. It was Mr Black! Three kids fled screaming out of that forbidden shed. Behind squawking and cackling for all he was worth appeared the mysterious Mr Black and six white hens hot in pursuit.

Mr Black was a great big old rooster you see. Bane of the farmyard for many years. The farmer couldn't bring himself to chop off the old chook's head. He must have heard the commotion upon his returning from town. Out the old farmer came shaking his head at the breathless kids running for their lives. As they passed eyes wide with shock the old farmer waggled his finger and said "I told you before! Beware of Mr Black! Now get on home before I call your mother!"

The little sister just watched as Mr Black finally slowed, shook his big black rooster tail then crowed with all his might. To her big brother the little sister said "Hey that's just a chicken! Chickens can't eat little girls so there!"

And that my friends is the end of the tale of the mysterious Mr Black.

And the real story? Indeed there were some old chook sheds next door on an old farm. Indeed my sisters and brother entered one of those old sheds. And indeed they were chased by one big old black rooster. I was five at the time when it happened. As for the rest heck it's all just a good old farm yarn. One to tell the kids on a very very dark night by the fire.....