When I said I wanted house cow I didn't mean literally! 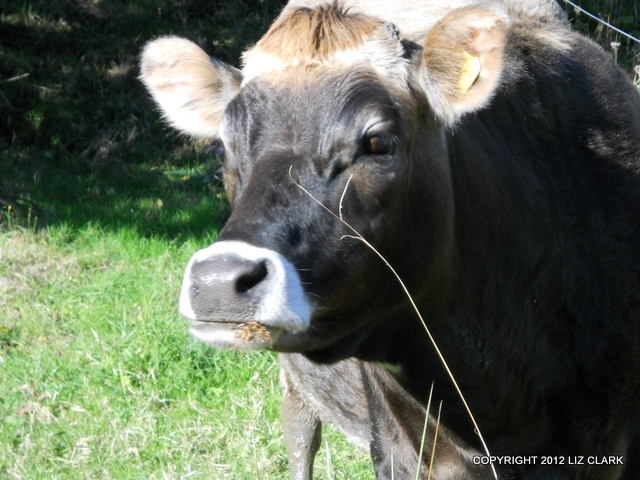 Each time I see a book about caring for your house cow, I think of the time when the Terrorist was a year or so old. House cows are supposed to be in-milk cows that are used for supplying the house hold - or so the proper definition would be so defined.

A-hem! I'll just put the lecture glasses down now and get back to what I was prattling on about.

A House cow is supposed to be outside in a paddock eating grass - try telling that to a year old jersey heifer that thought she should be a little more than familiar with her surrogate mother's house.

Think of a pleasant, warm kiwi summer afternoon. It's a bit hot so all of the doors and the windows are left open. Think of a small black chicken named Maggie May strolling in as if she owned the place to help herself to the cat's biscuits in the kitchen. Joined later by Feather the dumb chicken who sneaked past the stupid human's gaze. Why? Probably because I was occupied at the time doing the washing in the laundry.

Okay that's just fine and dandy. Chickens in the kitchen is one thing. They can be easily evicted and given a swift boot in the tail feathers not to mention a good telling off. Foiling Maggie May and her poultry cohorts was never an easy task. I'm sure that lot used to hold secret meetings in the old chook house on how to fool the stupid humans at ever turn. So..where was I again? Oh yes the matter of the Terrorist and her want to be near the human surrogate mother.

So there we are a pleasant summer's afternoon, chickens in the kitchen and......a pet jersey heifer standing in the middle of my lounge. Yes you read it right. In..the...middle ..of...my..%$$##@@!!!...lounge. She was ever so pleased to see me as I blundered out with a basket piled high with wet washing. Yes so pleased she stood on my bare feet with her rather heavy clompers for hooves. Painful to say the least.

And there were further problems....the bull was also about to come through the front door in search of that heifer he was figuring on having a very good time with. Said bull was supposed to be in his paddock behind and electric fence with his girlfriends NOT trying to get at a small jersey heifer that was standing in the middle of my lounge! The door was shut in his big white hereford type face. I don't think he was too pleased about being denied said jersey heifer. But denied he was and sworn at to get back to his %$$##!!! paddock or end up at the works. (Later on he did end up going to the works).

The task done of shutting the door in the bull's face - the next was to get said jersey Terrorist out of my house. No amount of shoving and pushing on her rear end would shift her out of that comfy place - aka my lounge where humans are supposed to sit, gasbag with each other over coffee and foods that would make a dietician recoil in horror from. As I attempted to remove the Terrorist from my house, a small white kitten by the name of Sasquatch decided he would use my leg as a climbing pole - with claws latched onto my skin. Oh what fun! NOT!

One thing I knew I needed to do and that was to get the Terrorist out of my house before the expected visitors showed up. Not a good look really having a cow greeting the guests at the door. In the end I had to use her old bottle. She hadn't been weaned until she was nearly a year old. So the bottle won the day - even if it was filled up with tap water. It worked. Out she went with the bottle - which got rapidly detached from her mouth. It was an Olympic style sprint back to the door with a white kitten still biting my leg.

By the time I remembered Maggie and Feather were in the kitchen they had eaten all of the cat biscuits. Take some advice never ever ever......take in small jersey calves with big eyes and big bambi ears. Otherwise.... I'd advise you keep a shovel around - just in case the house cow becomes a literal one.
Email Post