The Three Feathered Psychos (that used to darken my door) 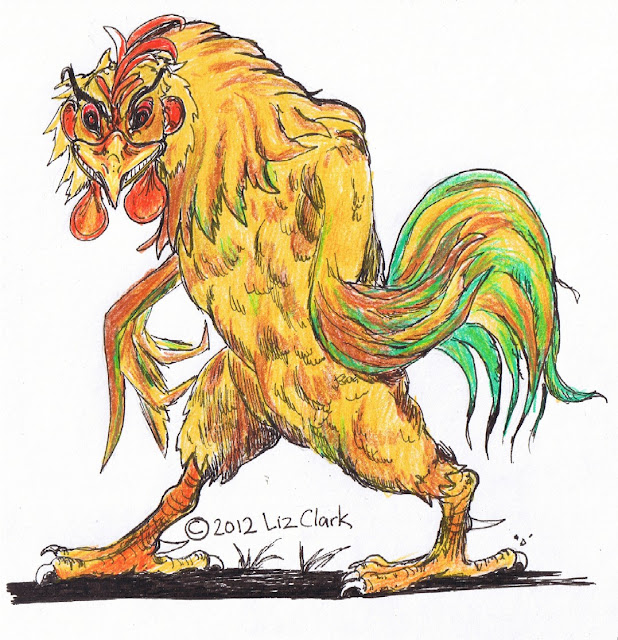 Once upon a time six little eggs were placed under a broody, very grumpy black hen named Maggie May. Maggie May wanted some little chickens all of her own. After 21 long days out hatched five little chicks all fluffy and sweet.


Maggie May was the farm yard boss no if's, but's, or maybe's about it.Not even the cats dared to take her on - otherwise punishment came with the end of a sharp chicken beak and a good old fashioned hen's cackle of a scolding. The Three Feathered Psychos though had other ideas. The had it all planned out by the time they were a year or so old. Complete with loud crows and shiny pretty rooster tails they figured they were just the best thing to have ever come out of Chicken Heaven. Not a chance there.


All three would chase Maggie May and Feather around the farm doing what all typical roosters did. Jump the hens and try to make chickens. If the term 'hen pecked husbands' could be applied literally then this had to it. Stupid rooster would jump on Maggie May, who in turn would cackle with indignation then chase said offender right down the long farm driveway pecking him as she went. Full speed they would go with dumb rooster squawking from each peck received. Served them right I say. Darned roosters.

They turned into the rooster mafia by the time they were eighteen months old. All big colourful feathers and great big spurs they started to take on the human residents. The kids got chased, the cats got terrorised and I'd end up with Sunshine the Rooster sitting on my bench every other day waiting for the cats to get fed.

No visitor was safe at the farm gate. One of the Three Feathered Psychos would always be there to make the surprise attack. Our rural postie gave them the marching orders every time they tried taking him on. A good swift boot in the tail feathers soon had them showing him some serious respect.

The last straw came when they started attacking everything that moved including their owner. From that point on it was war. Human versus Three Feathered Psychos. We never left the house not without a big stick and they soon got the message take me on Feathered Psychos and it will be the last thing you lot ever do.

At last we got them imprisoned in the chook house where they could do no further harm. As to their fate I think most can guess. I don't miss the Three Feathered Psychos and their 3 am crowing competitions. I'm too busy enjoying the peace now they have long since gone to Chicken Heaven.
Email Post