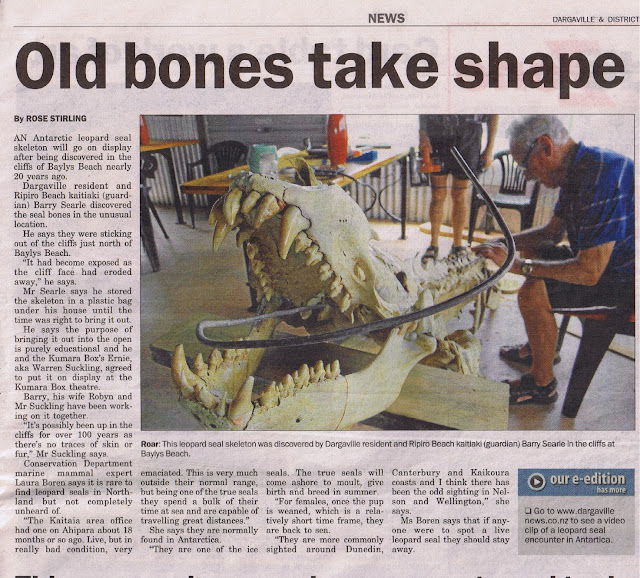 Reading through last week's Dargaville & District News (1 February 2011), I came across this fascinating article about the bones of a  Leopard Seal (Hydrurga leptonyx) that were being put together for display at the Kumara Box Theatre in the township. According to the founder Barry Searle he had discovered the bones jutting out of a sand dune on Ripiro Beach. He had removed them then had stored them under his house in a plastic bag. It was estimated, according to the article, that the bones had possibly been in the dune for at least 100 years. It fascinated me enough, to go looking into other historic incidences where these Antarctic range animals have been found in places in northern New Zealand, other than their own habitat.  Leopard Seals have a vast range. They are large animals with predatory behaviours, they are known to attack human beings if provoked. From time to time they do appear on New Zealand coastlines further north than normal.

..A sea-leopard, 11ft 3in in length, is reported by the Auckland Star to have come ashore at Stanmore Bay, Whangaparoa.

The Leopard Seal is listed on the IUCN Red List as being of least concern due to its wide range. Its diet includes penguins and other seals. If you do see one alive on a Northland Beach, then do the right thing and leave it well be. If in doubt get hold of the nearest Department of Conservation representative. It is against the law in New Zealand to interfere with marine wildlife. Better to be safe than sorry and end up seriously injured or worse dead.
Email Post