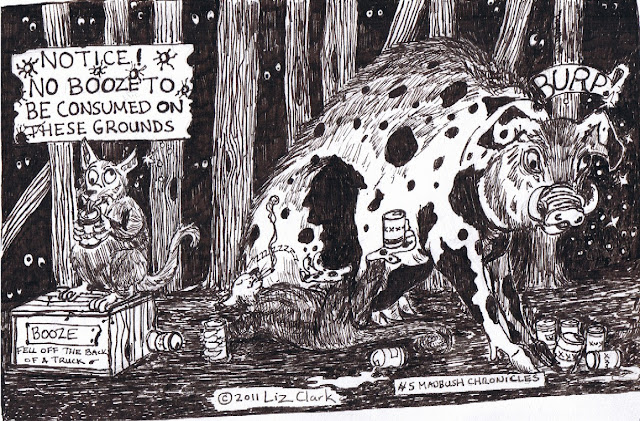 We were looking forward to our share of fresh butter beans that next night. They just needed one more day before they were just right to pick. The menu would be changed that next night when the midnight bean thief came calling at our doorstep.

Strange noises in the dead of the night. A kind of a crunching sound, as the newly initiated one into the Order of the Sneaky Midnight Raider, began operation deny human idiot from harvesting legume source. It started with one...then two...then a third had gone flying to hit an old bottle of home brewed beer left outside and forgotten.

It had been a bad brew made who knew how many years ago. For some reason that old bottle of bad home brew had ended up amongst the fencing gear, and was never used for anything but taking up space. Finally it was left one day out in the weeds and out of sight.

It had stayed upright all of that time until the bean thief had hit the bullseye and it had hit a rock. Now that bad old brew bottle had cracked open the contents tipping out. The possum population were waiting to take advantage of the free meal and a drink to go. There was a free for all going on out there. The snails and the slugs were quick to join in the free tasting session on that bad old brew..and the Bean Thief continued with the purloining of our longed for butter beans which we would never get to enjoy.

The Bean Thief was into the next row of beans when it gave its nocturnal activity away. The dog woke up and started yelping Hey Bean Thief! Leave them beans alone!. He was on the vigil guarding those longed for beans, but for all his effort and all his noise the Bean Thief wasn't budging.

With big deer like ears and big eyes, the bean thief looked far too innocent to commit such a crime. Those rotten old possums, scheming snails and sneaky slugs were the pest mafia that usually did all the raiding. But not this time it seemed as a window was opened and the dog told to put a sock in it.

It was then, that the Bean Thief revealed herself. With long eye lashes, and a little moo she came running to the sound of that grumpy voice, that had two blinking sleep filled eyes and a flea ridden cat sleeping by her head. The game was up the bean thief caught out.

The human idiot rose out of bed to blink sleepily at the bean thief who still had part of the evidence slowly vanishing into her small jersey calf mouth. "Miss Lily!" The human idiot said, staring in hopelessly in vain, at the thought that if one bean plant was vanishing down that little bovine throat, then maybe she had done over more.

With much grumping and huffing the human idiot muttered dire things to pull on old gumboots, and find the one thing that matter most in the Miss Lily's mind.

Out came the bottle and Miss Lily came mooing her loudest and chasing the bottle carried by the muttering human idiot back to her broken tether rope. While she guzzled with glee ,the human idiot tied back up the rope. Took note of the funny walk of the possum near that bad old home brew, and wondered if the world was really crazy or it was just my imagination.

In the morning though, the evidence of the demise of the scheming snails, sneaky slugs lay in many piles. The possum poo by that old home brew bottle now well and truly emptied. It came to only one conclusion. Don't feed homebrew to the wildlife...pour it down the sink.

And those beans well they were all gone. So we ate the tinned ones instead.