TAKE YOUR FILTHY HANDS OFF MY SERENGETI 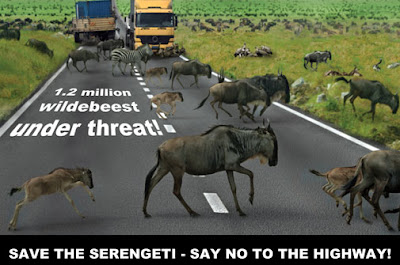 What is he up to?

TAKE YOUR FILTHY HANDS OFF MY SERENGETI!

They want to build a highway on the Serengeti. Now I for one, don't think they should come along with the earthmovers and the dozers, to wreck an iconic landscape. It's part of the great migration routes, that for millions of years, the wildebeast, the zebra and other grazers have followed for generations. They follow the rains year in year out, forever on the move in search of new grazing. They have to compete with other grazers, human settlement, poachers and of course the predators that are always waiting for the weak and the aged. That's how the cycle of life works or so it used to. 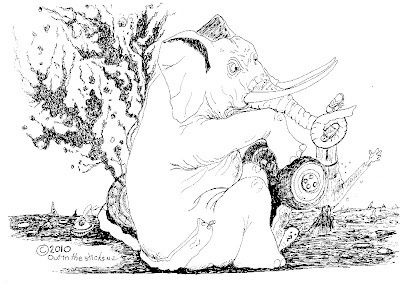 If it was a cartoon Serengeti, then those folks who are planning to chop it up for a highway, are figuring on moving on it, they might have a problem. First of all they'd have to get through the wall of hacked off elephants, that would be stationed across the entire Serengeti. Four wheel drives would end up looking like a pizza and that's just for starters.... 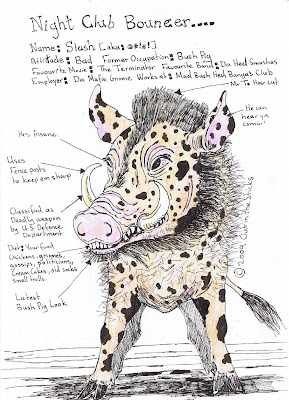 Then, there'd be an army of Bush pigs like this unsavory looking sod, just itching to do some serious tyre slashing, somewhere along the way to the Bush Pig's Night Club Bouncer's Convention. Now, if you're one of those executives that own the road construction company and you have one of those real fancy top of the line SUV wagons, I'd be thinking twice about trying to mow this nasty mean old bush pig down. He's mean enough to wipe the grin off that well plastic surgery altered executive mug. 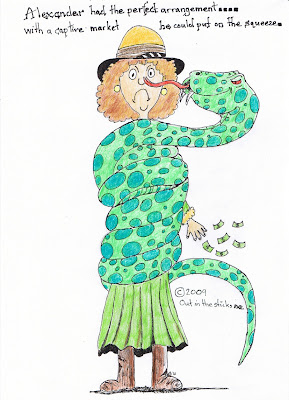 At every entry point there would be constrictors like Alexander who doesn't take bribes. All that stash would then be sent to a secret Swiss bank account to fund the wildlife rangers the elephants employed to catch the poachers out. 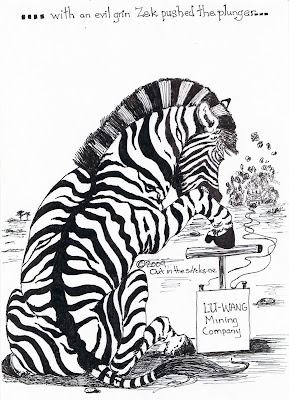 And of course we would need our mad bomber zebra Zek onto the case to keep those illegal mining companies out. So watch out you highway builders my cartoon animal army will be ready and waiting on the Cartoon Serengeti to fight back.