Whales are worth Saving - an essay by Inaya Clark aged 13 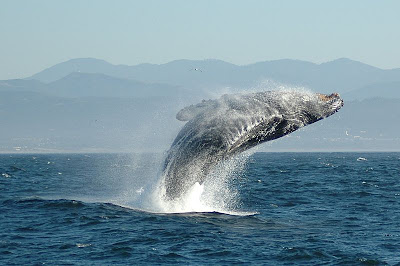 Imagine a dying ocean, dark with pollution. The water is empty, except for a few fish, a handful of forlorn seals, and the last of the whales.

The Orca calls out, lonely and mourning for lives lost. Its' timeless songs echo through the waves, finally reaching those on land - a hopeless cry for help.

But, it is too late for the humans to throw their last life line to the whale, and bring it back from the brink of extinction. They watch, as the forgotten animal vanishes from the earth, never to be seen again.

It's time we start trying to save them from this horrible fate.

Think of the oceans' food chain as a badly balanced tower. You take away one part, and the whole thing collapses. Or, for a better comparison, when a spider breaks a piece of an opponent's web, and it unravels, destroying the occupant's hope of survival.

But, the destroyer will be taken with it.

This is exactly what will happen to us.

If we continue to pollute, and kill the ocean's creatures, the poison will come back to us on land, bent on revenge. What goes around - comes around.

The whales balance the seas' food chain. If you have too many of them the chain will unravel. If there is not enough whales, the same will occur. But the ocean takes care of itself. The right amount of whales die each year keeping the balance. We don't need to interfere.

It's unfair that we have to suffer for others mistakes. Unfortunately, it's partly our fault. We should try to save our planet. We're the ones destroying it, and the way we are doing this is by killing the whales. It is our job to persuade the power hungry fools that they need to stop polluting the oceans.

Not later, not tomorrow, not next year - NOW!

We should be fixing our mistakes, not making them worse. The hardest part is admitting we're wrong. Once we get past that, we can begin to make a better future for ourselves.

Do you know how people tell you whales provide oil?. Well they're right. But we don't need it. We already have electricity, and technology.

What would they do after all the whales are gone? Carry on as if nothing happened - because they don't need the oil. May they did before, but not now.

What about the whale meat? It most parts of the world, selling it is illegal. We have more than enough food that we hoard for ourselves, and we don't share it out.

Did you know the United States of America spend enough on ice cream a year to feed all of Africa?

That is why we don't need whales for their meat and oil.

If we save these beautiful creatures now, we can preserve them, and the planet for future generations.

Everything is linked. From the tiniest of insect to the largest Blue Whale. If we don't act soon, the web of life will unravel, and take us, the destroyers, with it.

It's our fault, and we can't stop the effects of our greed showing forever.

It's time we make a stand, and save the whales, the planet and ourselves.