Whoever invented Mondays should be fired! 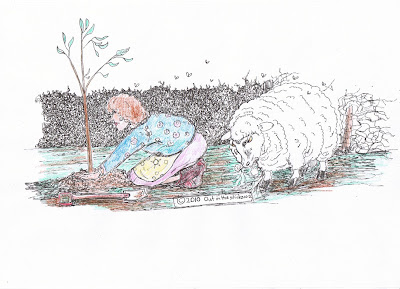 I hate Mondays. Mondays are always those days that just seem to be well....Mondayish. You wake up after the weekend with your eyes dropping on the floor, and perhaps a bit of drool there at the corner of your mouth - which you quickly wipe away, before the kids start making comments about Dawn of the Living Dead. You somehow make it out to the kitchen and make a coffee then remember that you ran out of coffee on Friday so you're stuck with something that might be tea..but...might be something else..maybe. Then on top of that there's no sugar and the kids have raided the cereal as well. Of course you just know it's a conspiracy when on top of all of that you end up staring at a small black chicken with beady eyes glaring right back at you through your kitchen window. Beyond the tell-tale munching of an escaped small jersey cow making the most of what is left of the so-called poor excuse for a garden (hidden by six foot high weeds). Your mains electric fence unit fence is clacking telling you its got yet another short somewhere and.....the loud dog is being...louder than normal. Reason? Cats at the 12 o'clock position coming in like Kamakaze hell fiends headed for the door. So I let them in before the loud dog manages to get to the point where noise control will be called (and take several hours to get to that so-called farm out in the sticks with an abatement notice) and he gets the world record for high decibels at dawn. Talking about other folks with bad Monday memories....

Many years back a lady I knew told me a story about one of her Mondays. She was out in her garden happily planting away, listening to the sounds of little lambs cavorting in the paddock next door, and the sound of birds singing away. It was tupping time - the time when the rams are put in with the ewes to make well... more little lambs and next year's export dinners. That was okay. All of the rams were in with the ewes, the garden was doing well and.......then there was the crashing sound. Little did she know one of the fence posts had come to the end of its life and had rotted out. She had been spotted by one particular ram who 'rammed' his way through the entire fence then 'rammed' her in her rear end with his big thick woolly head which in turn sent her flying up into the air straight into the compost heap..head first. I'm not kidding either. Let's just say the next day that same ram was hanging on a hook in the chiller....wonder...why.

To the jerk who invented Monday? You're fired, canned, terminated, downsized..given the boot. And there won't be any severance pay..ever.