Hey there's a Kiwi in our town! 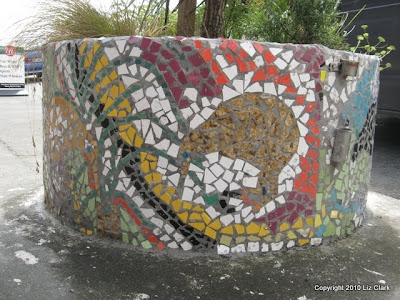 Well no there isn't actually - not the bird one anyway. Lots of human ones running around. A group of some very talented adutls and kids got together and had created some wonderful mosiacs with a Kiwi theme on the planter tubs in the township's main street. I've been meaning to get some photos - we finally I did. And I visited Amy at the library while I was at it.We've had some rain but those Rain Gods had better sort their act out or we're going to end up looking like the Sahara Desert it is that dry. Dust everywhere right now. The pasture growth is in arrest because of the dry soil - moisture levels now are non existent. I've been editing so not much has been done around the farm although I have been naughty and have been doing some serious artwork. 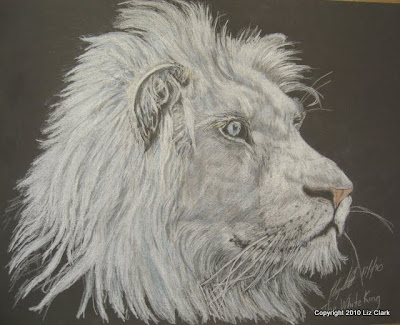 A couple of weeks ago I was approached by a UK based organisation called Lion Aid who asked me if I would consider donating them an artwork for a fundraising auction in the UK in March this year. I said yes. Above is the result. Titled "The White King" this is a portrait I did based on several reference photos I took of a white lion named Laduma at Zion Wildlife Gardens last year. I was really grateful to Sara for her help on getting all those wonderful photos. The team gave up their time for me, Amy and Mike to show us around and introduce us to the awesome big cats at the park. That is just something to remember always. I will be visiting again shortly to catch up with my wonderful friends at ZWG and to say hi to those incredible big cats and a little baboon named Foxy who I have a special love for. At 37 she is getting on in years. Foxy has nasal cancer so the team there are keeping a very close eye on her and making sure she gets the best of care. I hope to see her again sooner rather than later. Hope everyone is well and happy.
Email Post